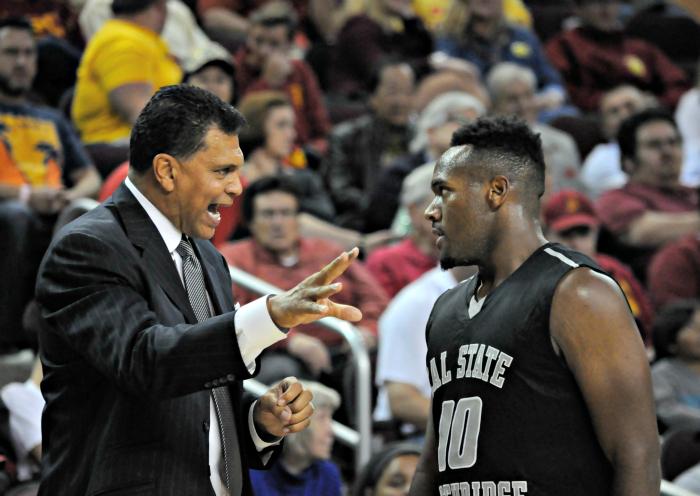 The Matadors were defeated by the Long Beach State 49ers by a score of 94-79.

The Matadome rocked early with CSUN trading baskets with the 49ers.

Junior guard Kendall Smith set a career-high with 27 points though it proved to not be enough to hold off the 49ers.

“Statistically there’s really nothing that sticks out other then them making 15 threes,” CSUN Head Coach Reggie Theus said. “Take away [Nick] Faust who made some real threes with hands in his face, you take four or five away and it isn’t a horrendous situation.”

Long Beach State senior guard Nick Faust made seven-of-eight three-pointers and with a majority of those threes coming with a hand in his face.

The Matadors shot 50 percent for the game and 46.2 percent from the three-point line, but that was overshadowed by the sharpshooting done by the 49ers.

“We got all the shots we needed. I thought as a team we shot 50 percent from the field,”Theus said. “When it’s all set and done, they shot a few more free-throws and made a few more threes.”

A three-pointer by Kendall Smith made the score 21-19 at the 9:12 mark of the first half, the three-pointer gave CSUN their largest lead of the game.

“It’s a growing-process like coach said it’s my fourth or fifth game back,” Smith said. “Trying to take more of a leadership role with the guys, knowing when to say certain things and when not to.”

Following a technical foul on sophomore guard Micheal Warren on a 4-point play at the 4:04 mark in the first half. Momentum seemed to shift towards the 49ers even though Warren completed the 4-point play following the technical.

Senior forward Tre Hale-Edmerson made back-to-back baskets following hard drives in the paint to begin the half.

Those baskets left the Matadors trailing only by one with the score being 41-42 in favor of Long Beach at the 18:28 mark in the second half.

With 13:58 to go in the second half, sophomore guard Jerron Wilbut nailed a three-pointer to cut the 49ers lead to one point.

“I’m excited about this basketball team. I think we’re very talented and we have all the skills to win game. I’m excited for our future,” said Smith.

This was the closest the Matadors got before the 49ers ran off with the game following a barrage of three-pointers.

“Long Beach grinded it out better than we did from about the 15-minute mark on,” Theus said.

The Matadors will go on the road Saturday, Jan. 9, against California State University, Fullerton. This will be the Matadors first Big West conference road game of the season.