Matadors beat USC to improve to 6-0 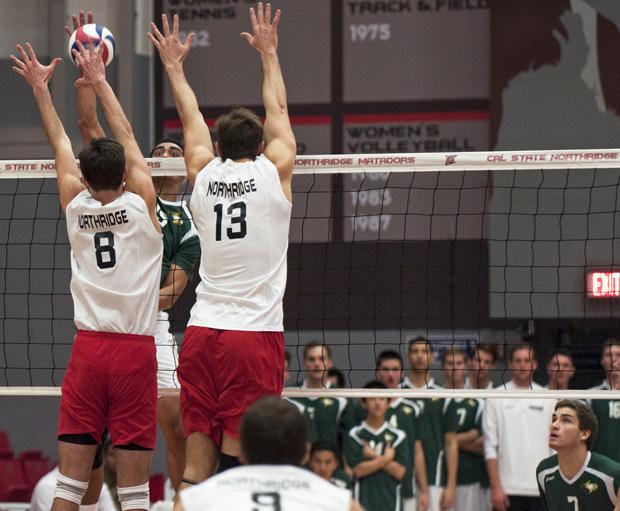 The CSUN men's volleyball team extended their winning streak to six after defeating the USC Trojans on Friday night. (File photo / The Sundial)

This is a record unseen in CSUN men’s volleyball since 2010. The 2010 team took its season all the way to the NCAA Final Four.

The Matadors four set win against USC (25-21, 23-25, 25-22, 25-19) was highlighted by some hitting across the board as freshman setter Sam Porter spurred the Matadors to a .41 hitting percentage. Porter’s fast flowing offense helped him to a game-high of 52 assists and made it easier on the CSUN hitters who were frequently faced with just one blocker.

CSUN head coach Jeff Campbell is excited about the play of the Matadors—who now sit atop the Mountain Pacific Sports Federation rankings—but also conscious of the weaker schedule they have been competing against thus far when comparing them to a traditional power that was once ranked no. 1 in the country.

“We’re not looking too much into that, we’ve got some tough matches coming up and we just want to focus and get ready for them each one at a time,” said Campbell.

Junior opposite Jakub Ciesla killed 19 balls on 30 attempts. He opened up the first set with seven kills including some thunderous line swings. His strong hitting ensured the Trojans never had a chance in the first game, keeping them out of biting distance after trading points in the set’s early moments.

“Since jumping into the starting role Sam and I have been figuring out our connection together,” said Ciesla. “Tonight he was always giving me a maximum of two blocks which made killing the ball a lot easier task.”

The Trojans had players out due to injury, including the star middle Andy Benesh. This helped CSUN middles Josiah Byers and Eric Chance at the net. Chance had 12 kills, hitting .857 and managing 4 digs in the process, while Byers had 10 kills in 18 swings.

Stronger serving from the Trojans in the second set helped them even the game score a one apiece. However, efficient attacking from the Matadors had them rolling for the last two sets, winning them 25-22 and 25-19.

The next game for the Men’s Volleyball team is Wednesday, Jan. 20 at 7 p.m. against Cal Lutheran at the Matadome.