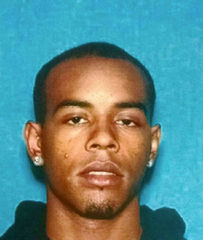 Police have identified 22-year-old CSUN student Emily Anna Fox as one of two victims in a double homicide shooting at an apartment building in Winnetka over the weekend.

Officers responded to a radio call from the female victim around 4:30 p.m. in the 7600 block of Oso Ave. on Sunday. Fox reported that her ex-boyfriend was at her residence and was armed with a gun, according to a press release from the Los Angeles Police Department.

“The preliminary report says the female victim called 9-1-1 and reported that her ex-boyfriend was at her residence armed with a gun,” said Martin Furtak, a volunteer with the Los Angeles Police Department, Topanga Division.

The suspect who eluded police, has been identified as Brian Anthony Gonzales, 24, also known as “Brian Hammond,” according to the police statement. He has been described by the LAPD as an African American male, 5’7 and weighing approximately 160 pounds, according to police.

According to the statement, the Los Angeles Fire Department responded and pronounced both victims dead at the scene.

Fox was raised in the Santa Barbara area and according to neighbors was studying to eventually enter law enforcement.