CSUN loses to UCR despite a double-digit rally 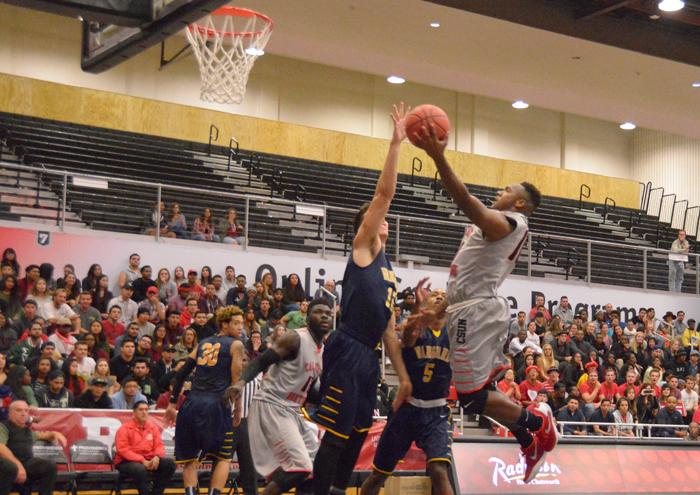 The Matadors drop their second-straight close game to the UC Riverside Highlanders, losing 75-72.

CSUN showed resiliency throughout the game battling from double-digit deficits but the Highlanders’ toughness in crunch-time proved to be too much for the Matadors.

“The thing that looked for me was toughness; I didn’t think we did the grimy things that it takes to win a game,” said CSUN head coach Reggie Theus. “When the game’s on the line you gotta come up with the hard stuff.”

The Matadors were out rebound by double-digits for the second-straight game.

The Matadors made seven-of-16 from the three-point line, despite shooting 39.7 percent from the field.

CSUN did make 19-of-23 free throw attempts in the loss.

Northridge had seven threes in the first half and finished with 16.

“That’s just not the way we play,” Theus said. “That’s a lot of threes for us, but we shot well today.”

Junior guard Kendall Smith was CSUN’s leading-scorer in the game even though he only shot four-of-15 from the field.

He said teams are playing him differently now.

“They’re not playing me straight up,” Smith said. “They’re sending two and three guys at me when I drive to the basket.”

CSUN began the game sluggishly allowing the UCR Highlanders to jump out to a 7-0 run.

The Matadors got within one point after a lay-up by Smith making the score 7-6 with 17 minutes left in the half.

The Matadors trailed the Highlanders 36-31 at the half after shooting 33 percent from the field.

After trailing by seven early in the second half, the Matadors went on a 6-0 run to get within one point following a lay-up by sophomore guard Micheal Warren.

The Matadors battled again to get within one point following a free-throw by senior forward Tre Hale-Edmerson with 13:14 to go in the second half.

After being down by ten points, the Matadors battled to get within one following a three-pointer by sophomore guard Jerron Wilbut, making the score 64-63 with less than five minutes left in the half.

The Matadors took their first lead of the game at the 2:07 mark following a three-pointer by Wilbut.

However, the lead would be short-lived as the Highlanders would tie the game on the ensuing possession.

CSUN dropped its second-straight game decided by three or less points. The loss to UCR comes off the heels of a last-second loss at UC Davis two nights prior.

Hale-Edmerson filled up the stat sheet scoring 13 points, adding four assists to go along with three blocks while making three-of-five from the three-point line.

The senior forward moved into second-place on CSUN’s all-time games started list by starting in his 112th game.

Hale-Edmerson said the team’s pride is what pushes itself.

“We all have goals and if we lose none of us are gonna reach our goals,” he said. “The only thing that’s gonna get us there is the team winning.”

The Matadors play the Cal Poly Mustangs at the Matadome on Thursday at 7 p.m.