Spend time on learning, not on rushing through school 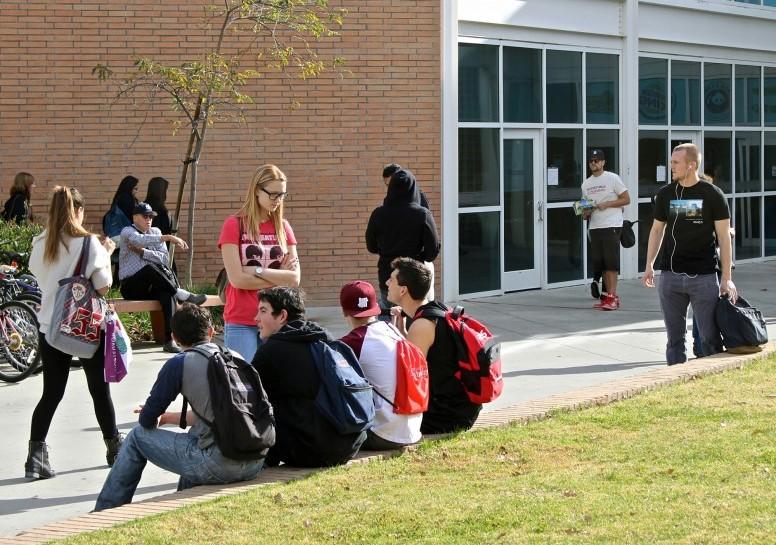 CSUN students gather in front of the Matador Bookstore Complex as they wait for classes. (File Photo /Lucas Esposito / The Sundial)

It is no question that college students are under a lot of stress due to factors out of their control. Stress can be triggered by preparing for exams, projects and finals, while trying to balance extracurriculars, work and relationships.

It’s clear that being a college student is definitely no easy task to achieve, especially when expected to graduate in four years.

With everything students have to juggle, they are even more stressed about finishing on time. Now don’t get me wrong, graduating in four years is definitely doable. However, for others it seems impossible.

College should be about discovering what you love to do and learning about it; whether that takes four years or 10 shouldn’t matter. When students are put on this timeline, they often get caught up with finishing on time rather than actually learning.

I know this true for me. I’m a fourth-year college student, who has barely realized that I chose the wrong major.

However, I may have realized this sooner had I focused more on my interests in school rather than getting out in four years. Yes, graduating in four years or less is ideal and a lot less money to pay. However, the pressure for this to be a reality is not practical. If students are rushed to get out, it diminishes the quality of their learning.

I’ve realized that for many students, including myself, focusing on graduating in four years has set us back.

“Yes, we have a huge completion problem, but we also have a problem that a lot of students graduated without learning what they need,” said Debra Humphreys, a spokesperson for the Association of the American Colleges and Universities. “[Colleges] are too focused on efficiency and not enough on quality.”

The problem is, students want out and they want out fast. This means doing anything they can to just get by in order to walk across a stage. However, with impacted majors and hard-to-get classes, this also makes graduating on time much harder. Students should realize that in the past it was much easier to be able to graduate in four years and to this day it is still the reality for many students.

However, if it isn’t your reality, that is okay. It doesn’t have to be.

“It took me seven years to graduate, and I still changed my mind afterwards. It doesn’t matter how long it takes, as long as you’re there for a purpose. I just wish I had learned that sooner,” said CSUN alumna, Evelina Rayas.

Besides, the average time it takes a student to graduate now is six years, according to the U.S. Department of Education.

Why rush these precious years? It will benefit students to stay longer if you really want to figure out what your passion is – or isn’t. It works both ways.

Students, stop worrying about the timeline. As long as you get to the finish line, it won’t matter if you’re the tortoise or the hare.