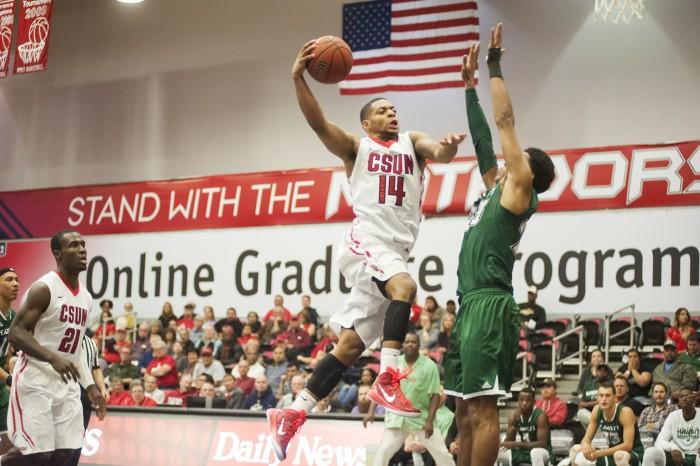 The Matadors defeat the Cal Poly Mustangs 76-74 on the heels of a late-second 3-pointer by sophomore guard Jerron Wilbut.

Wilbut was the Matadors’ leading-scorer, scoring 15 points on 4-of-7 shooting. He scored 12 of his 15 points in the second half.

“I’m learning a lot of different things, I’m just trying to do whatever I can to help this ball club and help my team win” said Wilbut. “My job is to knock [shots] down wherever I see free”.

In addition to Wilbut, the Matadors had a great showing from their bench, who scored 39 of their 76 points.

After scoring the first basket of the game on a lay-up by junior guard Aaron Parks, CSUN would trail the Cal Poly Mustangs 2-8 at 16:35 mark in the first half.

In a half where the Matadors trailed by as much as eight points they continued to stay close despite the Mustangs being in control for much of the first half.

The Matadors would even tie the game at 30 with 4:01 to go in the first half on a three-pointer by senior forward Tre Hale-Edmerson.

At the half, the Matadors would trail the Mustangs 39-40 with both teams shooting above 50 percent from the field.

Forward Tre Hale-Edmerson would lead all scorers at the half with ten points on four-of-five shooting while also making both of his three-point attempts.

The Matadors would take their first lead of the second half 45-44 following a free-throw by guard Jason Richardson who made a hard charge at the basket.

CSUN and Cal Poly would continue to trade leads in the early going of the second half.

After CSUN took the lead at the 14:54 mark in the second half on a Aaron Parks jumper that would make it 47-46.

The Matadors would then go scoreless for five-plus minutes while the Mustangs would go on a 12-0 run.

“This is the moment in the game where you stay together and stick together” said CSUN head coach Reggie Theus. “You grind harder and you have to be able to find through adversity to win these games.”

After being down 47-58 at the 9:21 mark, the Matadors would go on a run of their own to get within four points following a pair of free-throws by Wilbut with 7:31 to go.

“Sometimes our teammates tend to separate, my job as a leader is to be able to bring guys together” said Parks. “I’m usually the guy to bring us together on the defensive end or offensive end, whatever it takes for us to win.”

A 3-pointer by Wilbut at the 2:07 mark would put the Matadors down by one, trailing the Mustangs by a score of 71-72.

Following a defensive stop, Wilbut would knock down what would be the game-winning three-pointer with 18 seconds remaining giving the Matadors a 76-74 win.

Next the Matadors will travel to the Thunderdome to play the UC Santa Barbara Gauchos on Saturday, Jan. 23, 2016.