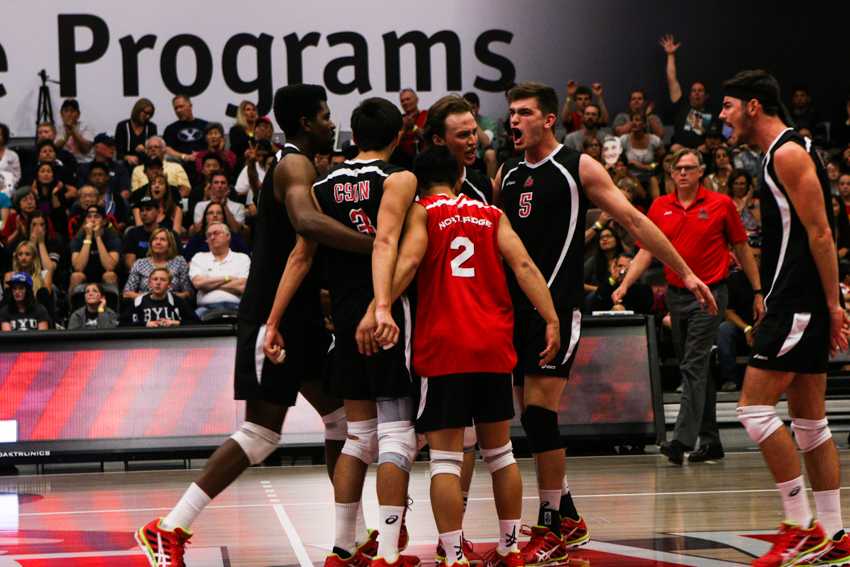 Men's Volleyball play against BYU in May (File photo / The Sundial)

The CSUN men’s volleyball team secured the longest opening win streak in the program’s history after a three set victory over the Cal Lutheran Kingsmen on Wednesday night at the Matadome.

CSUN opened their seventh match of the season with a 25-17 victory in the first set. Cal Lutheran began to build momentum early in the second set by capitalizing on a few long rallies and responsive defensive plays, but the Matadors regained their focus late in the set to win 25-23.

Support from throughout the roster, and improved play from the service line helped the Matadors close out the Kingsmen in the third set of Cal Lutheran’s season opener, and NCAA debut.

“They’re playing a real game if it’s against CSUN, so I give them their props,” said Greene Jr.

Players coming off the bench played a significant role in the evenings win.

“We’ve got depth; whoever we need to go in and sub will get the job done,” said starting junior libero Nick Alegrado.

In light of the Matador’s outstanding record this season and strong play exhibited throughout the roster Greene Jr. says the team is really excited about the what is left of the upcoming season.

However head coach Jeff Campbell is keen to keep the Matador’s focus on the games ahead.

“We’re happy about the streak, but the streak isn’t going to do anything to help us beat Santa Barbara in next match,” says Campbell.

The team has been enjoying their recent victories, but they haven’t lost sight on the grueling path forward.

“We’re in a tough conference,” says Alegrado, “so we’re going to have to grind out every game.”

However, the matador’s recent success has proven that the Matadors have what it takes to be a force in their conference.

“We just need to play our game and stay confident … and we’ll be taking steps towards our ultimate goal: the championship,” says senior outside hitter Dan Starkey.

The Matadors now face the No 8 UC Santa Barabara Gauchos at Robertson Gymnasium on Jan 27 at 7 p.m.