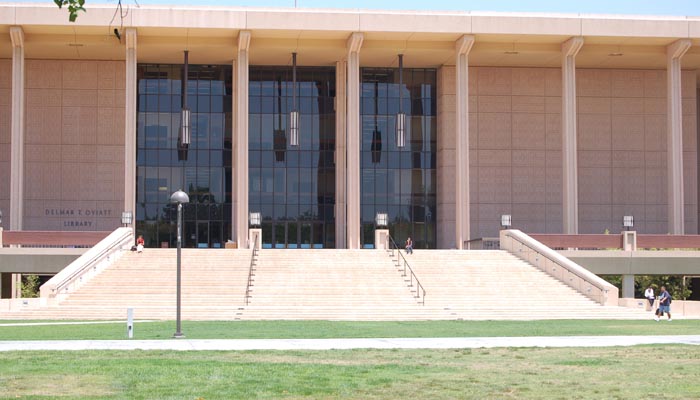 In the wake of record enrollment at CSUN, administrators have implemented new impaction measures that apply to applicants for the Fall 2016 academic semester.

Advocates for underprivileged communities are crying foul over the changes, concerned that losing guaranteed seats at CSUN means more uncertainty for students’ futures. CSUN administrators are uncertain of the consequences of the new provisions and can only wait until the results come in.

CSUN has been impacted since 2009. Impaction is declared when a CSU or UC campus receives an excessive number of qualified students for their school but cannot adequately accommodate them with funding on hand.

According to William Watkins, vice president of student affairs and dean of students, the state has established enrollment targets aligned with funding allocations, and CSUN has been consistently going over those targets.

“Campuses are able to go beyond the number of funded students,” Watkins said. “But when we have a number of students that’s substantially above what we’re getting funding for … we erode quality.”

Students that are trying to apply for impacted majors at CSUN have been told to try to apply to other schools as backups. If an applicant has a major that is not offered at either university, CSUN has said it would still guarantee them a seat.

“Ventura County is out. Of course we are being told, ‘Oh, they can still apply,, but it’s just the standards are going to be different for them,’” said Gabriel Gutierrez, chair of CSUN Chicana and Chicano studies.

Gutierrez is concerned of the limiting of educational choices for disadvantaged students in the newly impacted regions.

“I am sitting here talking to a group of Ventura County counselors that came by,” Gutierrez said. “What type of advice do you give them? You might get in, but chances really weigh more heavily towards you not getting in.”

More majors are now impacted. According to the impacted majors page on the CSU website, CSUN’s list of impacted majors include accounting, business administration, cinema and TV arts, and finance. This group will be joined by kinesiology, music and psychology.

Applicants from these areas must now meet the higher GPA requirements as well as higher SAT scores. More is to be expected of students applying to CSUN from places such as San Diego or San Francisco.

According to the CSUN impaction web page, local students will be accepted with a SAT score of 2,900 or better. However the page fails to say what students outside that line will need. It only states they will need to meet “higher standards.”

“The campus decides where they want to set that bar, and every student who hits that and has a higher score — they get in,” Watkins said.

CSUN’s impaction policy is a two phase process. Phase I will try to admit 300 fewer students by the end of 2016. The aim is to decrease the student population by 1,200 in the next four years.

However, if the school is unable to bring down the number of applicants, phase II will be implemented. According to Watkins, phase II would likely involve increasing the number of impacted majors. Watkins said he hopes CSUN will not have to go through the second phase.

At a public meeting in October at Mission College in Sylmar, a coalition of community organizations against CSU impaction met to discuss CSUN’s impaction provisions and the consequences they could have on the community.

One of the issues they raised was that thousands of fully-qualified students have been denied access to CSU schools for the past several years. The group connected this with rising numbers of Latino/a applicants as a growing number of the population reaches college age.

Despite statistics showing growing numbers of students of color, especially Latino/as, at CSU campuses, Gutierrez sees impaction as one of many barriers that are hindering students of color from becoming college students.

“Policies have been in place since the 1980s and through the 1990s, wherein a concerted effort has been made to divest public investment in [this] younger generation that coincides, even with the demonization of [this] generation,” Watkins said.

Former CSUN student Susana Amezcua knows this quite well. Coming from the Santa Paula area of Ventura County, she was able to avoid the new impaction policy, but still struggled in high school.

Amezcua said she comes from a working class family, and her parents raised her and her three siblings on money from working as farm laborers. She said her high school expected little from students.

An examination of 2010 Census statistics of several municipalities in Ventura County can speak towards these low expectations. Though at about 11 percent the overall poverty rate in Ventura County is lower than the national rate, several cities and towns have much higher rates. Santa Paula and Fillmore, with populations of more than 10,000 people, had some of the highest rates of poverty at about 19 percent and 25 percent, respectively.

Poverty is being reflected in county high school demographics. Many schools have economically disadvantaged students that make up the majority of their campuses and qualifying for free or reduced-price lunches.

Looking at the School Accountability Report Cards of Santa Paula High School for the 2011–2012 school year reveals more than 75 percent of students received free or reduced-price lunches. Furthermore, more than 50 percent of economically disadvantaged tenth graders at the school were not proficient in English or mathematics.

“In a sense, we weren’t told that we weren’t going to college, but through our experience, that’s what we were getting,” Amezcua said.

Amezcua was able to take advantage of the Educational Opportunities Program and take the remedial classes that were needed in order to get into CSUN. However, the program is limited in the amount of students that it can take in. The fact that a limited number of people are allowed into the program worries her, especially since her younger brother might have to fight through similar impaction policies.

“He does his best, but he’s not that top A, B student … His GPA with impaction is not going to be competitive enough to get into schools that are impacted,” Amezcua said.

Her brother’s desire to get into the same college as his siblings is now difficult to meet.

“We’ve taken him to CSUN since he was young,” Amezcua said. “He knows CSUN.”

Despite the numerous criticisms, the new impaction rules go on. Recent data collected in November from CSUN’s Office of Institutional Research seems to point to early successes of the impaction plan.

The numbers of students applying from areas affected by impaction is significantly lower than 2014’s numbers. Applicants from high schools in Ventura County in Fall 2014 totaled 430. That number dropped in Fall 2015 to 409, and applicants for next fall are 209.

“As we move into this new phase, because this is brand new territory for us, we’re going to be doing a lot of analysis,” Watkins said. “We want to move in a thoughtful way that does what we are charged to do as public stewards here.”

This article was submitted by Professor Michael Hoffman’s fall investigative journalism class. The story was edited by Sundial staff.