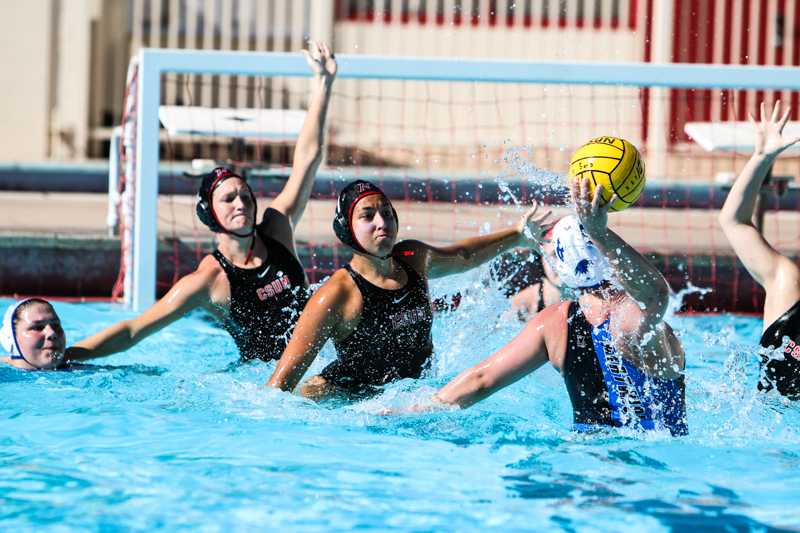 The Matadors started off the season ranked No. 19 in the country, but struggled out of the gates, going 1-3 in the opening weekend of the season. (File photo / The Sundial)

At UCSB’s Winter Invitational, the No. 19 CSUN women’s water polo team went 1-3 opening their season with three losses. CSUN is coming off of a winning 2015 season with an overall record of 15-11. Last year they beat both Azusa-Pacific, Cal Baptist and UC San Diego but did not play Michigan.

Against No. 24 Cal Baptist on Friday afternoon, sophomore attacker Katelnyn Fairchild led the team in scoring with her first goal of the season in the end of the first period.

The Matadors ruled the first period of the game by taking the early lead, 2-1. Sophomore center Amy Yule managed to score a goal minutes into the first period, bringing the Matadors ahead. This goal was followed by Fairchild who scored with just minutes left in the period.

After an almost scoreless second period, CSUN lost their 2-1 lead with Cal Baptist taking charge. The Lancers gained a 6-2 lead until the final moments of the period. Sophomore attacker Madeline Sanchez scored a goal with seconds left to tighten the lead for Cal Baptist 6-3. Moments after the goal by Sanchez, Fairchild scored giving the Lancers a narrow two-point lead.

The third and fourth period were tough for the Matadors as the Lancers held them scoreless until the final minutes of the fourth period. Junior defender Elias scored with just two minutes left in the game to make the final score 10-5.

After the tough loss by Cal Baptist, the Matadors pushed ahead to beat Azusa Pacific 14-12 in the second game of the day.

In the first period of the game, CSUN took the lead 3-1 after back to back goals by sophomore utility McKenzie Pollei and Sanchez.

The Matadors continued to prevail in the second and third period extending their lead to 11-8. Yule dominated the second period for CSUN by scoring two goals followed by freshman utility player Lindsey Garcia and junior attackerEmily Fuller, each scoring once.

Yule raised her goal count and continued to put CSUN ahead in the fourth period after she scored two more. She earned the most goals in this game at 5. After Yule’s multiple scores, Sanchez scored once more bringing their lead up 14-10. In the last minutes of the game, Azuza Pacific scored twice making the final score 14-12 and leaving CSUN the victors.

Just as Friday began with a loss, Saturday did as well.

In their first game of the afternoon, CSUN took on Michigan. The game started off slow for the Matadors as the Wolverines scored three goals in the first period leaving the score 3-0. Fairchild helped CSUN stay in the game by scoring near the end of the period. Her goal brought the score to 3-1, leaving Michigan at a two-point lead.

The Wolverines scored three more times in the second period raising their lead 8-1. Sanchez made her first goal of the day right before halftime making the score 8-2.

As the game went on in the second half, the Wolverines continued to prevail after scoring four more goals in the half. The Matadors pushed to get a few more goals after senior attacker Taitum Herrington and Pollei each scored in the fourth period.

The final score of the game was 12-4 in Michigan’s favor.

The second and final game of the day was a close one against No.21 UC San Diego.

The first period was exciting as Sanchez scored twice for the Matadors tying the game. The Tritons responded with a goal in the last seconds of the period, giving them a one-point lead.

The second period would be a successful one for Sanchez again, as she scored for the third time in the game, earning her a hat trick. UC San Diego would once again respond with a goal at the end of the period. The Matadors would go into halftime trailing by three points.

As the third period started, the Triton’s scored in the first minute giving them an 8-3 lead. CSUN came back and responded to these goals by shortening UCSD’s lead to 8-5. Sanchez scored in the period followed by sophomore utility player Shannon Hovanesian.

CSUN caught up to the Triton’s lead and tied the game 8-8 in the fourth period. The Matadors scored three times, each goal within minutes of the other. Yule, Sanchez and Fairchild scored the goals that kept the game tight in the period.

When the game came to a close UCSD scored twice more giving them the advantage. Hovanesian scored once more for the Matadors keeping the final score within one point. The Triton’s ended up taking the game at 10-9.