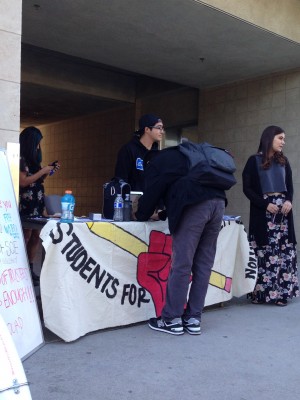 CSUN Student Eduardo Estrada from the Students for a Quality Education waits to talk to a student about tuition costs. (Brandon Jauregui / The Sundial)

A group of students started a petition to protest proposed tuition hikes across the CSU. The group, Students for Quality Education, rallied under Sierra Tower building Thursday, to bring the petition to students on campus.

Michelle Aranda, a Chicano studies major and intern for the California Faculty Association, who was at the event, said it had been difficult for the group to obtain signatures.

“So I feel like it’s been a little hard for us to bring people out. That’s why we have a petition going on right now, so we can get students on board and really put pressure on our Board of Trustees,” Aranda said. “To let them know, hey, a lot of people are not okay with this and tuition shouldn’t be going up.”

Members of the SQE plan to attend the open public forum with California State University Chancellor, Timothy White, on Friday.

“Timothy White will be on campus tomorrow and we will be there to voice ourselves,” said Eduardo Estrada, a double major in history and Chicano/a studies who also interns at CFA. “Right now, the Board of Trustees is trying to pass a financial model that is going to increase student tuition annually, based on inflation, which could screw over many students across the state. We are trying to rally people together to stop that plan.“

According to the California State University website, the current annual estimated tuition for undergraduate programs in California is $5,472. The estimate has not shown an increase since the 2009 to 2010 academic year, which was $4,026.

CSUN Professor, Steven Stepanek, who is also a member of the CSU Board of Trustees and moderator of the forum, served on the sustainability model that put together these proposals. He stressed that the model was created with the goal of students, parents and for campus to be able to look at what will happen with future tuition, so that there are no surprises.

“I understand where they’re coming from… We don’t want to raise tuition. Nothing has been passed,” Stepanek said. “What these students are talking about is [made] to avoid the problem of the past — to hold the tuition, hold it, hold it, hold it, until we have no choice but to raise it 20, 30, 40 percent. That’s never good for anybody, and we never want to have to do that again.”

The public forum with Chancellor, Timothy White, will be hosted at 1:30 p.m. – 2:30 p.m. on Jan. 29 in the Plaza del Sol Performance Hall. The free event is open to students and the public.