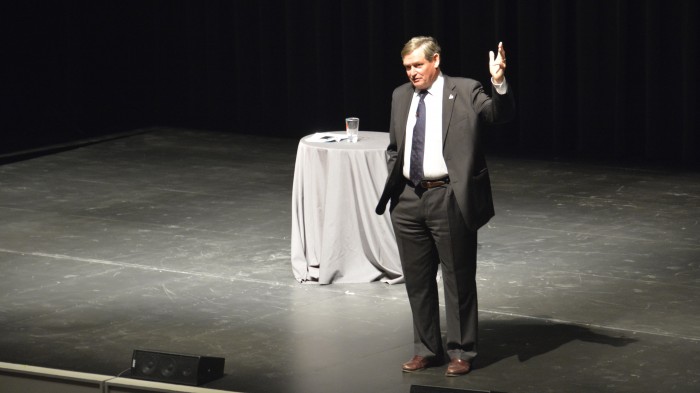 The topics of discussion ranged from the speculated tuition increases, the under-representation of minorities and frustrations about the current cost of education.

After a brief introduction from CSUN Professor and CSU Board of Trustees member Steven Stepanek, Chancellor White opened the forum with comments regarding his overall mission to better provide excellence within the CSU system.

“It’s time for us to really shoot for the moon,” said White about his focus to drive and challenge students from all walks of life to succeed. “When we succeed to eliminate the disparities in graduation success for students who come from low-income [communities], we will then have very tangible evidence that we have hit the moon.”

The Students for Quality Education were at the event expressing their concern over what they called the “privatization” of the public higher education system.

“On behalf of the Students for Quality Education,” said student Michelle Aranda, a Chicano Studies major. “We would like to congratulate you [White] on winning the award of privatizer of the year. Thank you for continuously allowing the further privatization of the CSU,“ to which Chancellor White replied, “Can I ask you a question?” Aranda and the rest of the SQE declined to speak further.

“I was just going to ask them, what are two or three examples of what they mean in a more detailed level by that word, and they didn’t want to share that,” said White after the event, in regards to the comments made by the SQE. “But I respect their discomfort in wanting to talk further.”

Noral Walker, a student from the National Society of Black Engineers discussed his concern about being the only African-American in his undergraduate class in the Engineering Department.

“I know it can be done,” said White in response to Walker, reassuring him with his plans to close the achievement gap across the CSU. “We have no gaps in [University of California] Riverside, and in 3 or 4 of our campuses have no gaps…. And it’s because they’re purposeful about the challenge and support. They have to be together.”

White expressed his satisfaction and gratitude for those in attendance after the event, stating that the open forum was his “highlight.” He stressed that, though the concerns were appreciated, there would be no tuition hikes this year or next.

“It really gives me a chance to hear authentic questions, authentic passion, deep seeded things that are troubling people here and now as well as the longer run,” White said. “I thought the people that even had critical things to say about the university in CSU were so respectful and I’m grateful for that, but I’m also grateful that they’re honest about what they’re concerned about.”