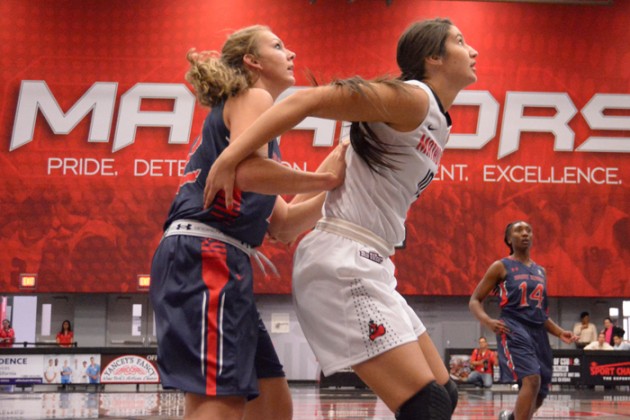 The win improves the Matadors to 5-16 overall and 3-4 in Big West Conference play.

Leading the way for the Matadors was freshman center Channon Fluker who has emerged as a legit low post threat during the team’s win streak. She registered her fourth consecutive double-double.

She scored 21 points on 76.9 percent shooting while pulling down 14 rebounds. She also blocked five shots.

The Matadors came out strong early, jumping out to an 11-0 lead within the opening minutes of the game, and leading 27-13 at the end of the first quarter.

The Matadors took a 50-28 lead into halftime with the combination of hot shooting and strong defense.

As the second half began, the Matadors continued their strong play, opening the half with a 13-0 run to push the lead to 63-28.

Although the Matadors hot shooting cooled off a bit in the second half, the defense remained strong.

CSUN shot 33.3 percent from the field as compared to 51.2 percent shooting in the first half.

The Matadors held the Titans to only 31.6 percent shooting from the field, including 23.1 percent from the three point line.

With Fluker’s emergence, the Matadors have been dominant on the inside and Saturday was no different. They outscored the Titans 36-26 in the paint and they out-rebounded them 51-40, leading to 20-second chance points as compared to only five for the Titans.

CSUN was also able to take care of the basketball better, limiting itself to only seven turnovers.

Strong bench play was also a factor in the game. Led by Morrow, the Matadors bench outscored the Titans bench, 21-6.

The Matadors will continue conference play as they head out on the road for two consecutive games. The next game will be Thursday, Feb. 7, against the Cal State Long Beach 49ers at 7 p.m.