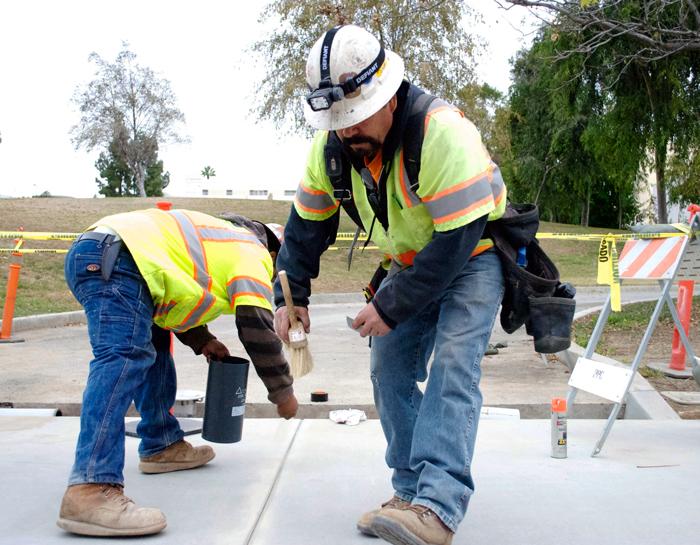 Construction workers finish their work on the side walk next to Nordoff Hall Wednesday morning on the firt week of the Spring semester. (Magaly Barajas / The Sundial)

Construction crews are scrambling to complete the re-piping of CSUN’s campus-wide heating system while attempting to maintain the Chancellor’s mandate to limit the project’s impact upon students.

The first phase of work had originally been scheduled for completion in late January or early February. Good said that phase one is now forecast to finish in mid-April.

An issue regarding delivery of steel piping from a manufacturer had delayed the project by about five weeks. The problem has since been resolved. The materials required to finish work on the next two sections of open trench are now on site.

Minor weather concerns, practices designed to limit the interruption of classes, and the high volume of traffic around the work site have further complicated the renovation of the heating system. Representatives of PPM expect the project to span a period of about two years.

CSUN’s heating circuit loops around the area defined by Nordhoff St., Etiwanda Ave., Plummer St., and Lindley Ave. The first phase of the renovation is currently taking place near Lindley and Etiwanda. PPM officials say that the first stage of construction poses the greatest inconvenience to students and staff.

Partial road closures along the west side of Lindley are a possibility, however, PPM Senior Director, Jason R. Wang, believes that traffic will continue along the street through phase one. Future portions of construction are likely to affect motorists driving along Etiwanda, Plummer, and Jacaranda Walk north of the G3 parking structure.

“Having to walk around instead of cutting through (the construction area) sucked … especially when I was rushing to class,” said Senior deaf studies major Maria Gonzalez.

She is relieved that the obstruction has been cleared in time for the start of the semester.

“We’ve been given a directive to minimize impact,” said Wang.

A variety or restrictions are in place to fulfill that objective. The loudest procedures are scheduled during the early hours before classes meet. Shut-downs of the heating system are only permitted within a 72-hour window through the weekends. The project has no effect on the university’s cooling or domestic water services. Moving forward, the next phase of construction will begin during the summer while student traffic is greatly diminished.

PPM officials say that they are, overall, pleased with the performance of Cypress-based contractors Plumbing Piping and Construction.

“Form a project planning and a funding standpoint we’re on track,” says Wang.

PPM did factor the likelihood of contingencies into their schedule, and delays have not had an effect on the endeavor’s predicted $7.1 million price tag.

The first $4.5 million requested to fund the first phase of construction had already been secured. PPM officials will engage with the Procurement and Payments department to plan out funding of the second phase of work.