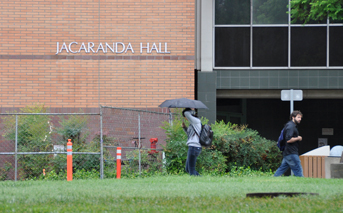 Heavy rain falls in front of Jacaranda Hall. This semester will see plenty of rain due to El Nino year. (File Photo / The Sundial)

With more heavy rainfall expected from El Niño, CSUN is prepared to keep the campus as functional as possible. Drainage is the main concern around campus.

One of the preventative steps CSUN has taken is to inspect all roof and overflow drains. The biggest concern with the drains is draining blocking hazards. The university has removed leaves and debris from the roofs of every building on campus. Leaks in the roofs are also a concern. If a leak is found, the necessary repairs will be made, and a water test will be conducted to make sure the leak was actually fixed, according to Physical Plan Management’s El Niño’s Preparation website.

Existing drainage around campus is being inspected, and deficiencies are being corrected. Some of the problem areas for drains are the softball women’s locker room, several locations around the Oviatt library and Eucalyptus Hall basement.

According to the El Niño’s Preparation website, the university is also going to inspect jet storm drain lines and verify that the storm sump pumps are operational.These preventative steps are only one aspect of the El Niño preparation.

Jason Wang, Senior Director of Physical Plant Management (PPM), says one of the main issues PPM is dealing with is water levels on campus roads.

“The larger issue is getting to class crossing campus roads on foot when water levels flowing down the gutter is at its highest,” he says.

The university plans to deploy footbridges in high traffic areas that are in danger of flooding. PPM advises students to get to campus early when water volume is lowest and to cross campus as far north as possible. Walk off mats will be placed in doorways or high traffic areas as well. Walk-off mats are mats made of material that will absorb excess water and prevent slipping.

The idea of umbrella bags was proposed, but the university has not purchased them because of budget considerations, according to Wang.

When it comes to traffic and parking, Wang expressed his concern.

“Our biggest challenge around vehicular traffic is the water accumulation as it runs down streets around campus on Etiwanda and Lindley . Most parking lots and structures have sufficient run off and drainage so as not to be significantly impacted be even the heaviest rains,” says Wang.

Wang says that the university looked into different ways to capture and reuse rainwater as well as grey water from sinks and showers, but discovered several layers of health and safety regulations. It became cost prohibitive, so the plan was never carried out.

The university is procuring storm supplies and deploying them around campus. These supplies are things like mops, hoses, sand bags and water pumps. CSUN is also ensuring adequate rain gear for employees. The emergency supplies are stored in several locations on campus. The locations are Redwood Hall 116A, Bayramian Hall 209G, VPAC 036 and Citrus Hall 3201.

If you come across any leaks, blocked up drains, or water pooling, please contact Physical Plant Management at (818) 677-2222 or 2222 from any campus phone.