The Matadors are taken down at home by No. 9 Pepperdine Waves 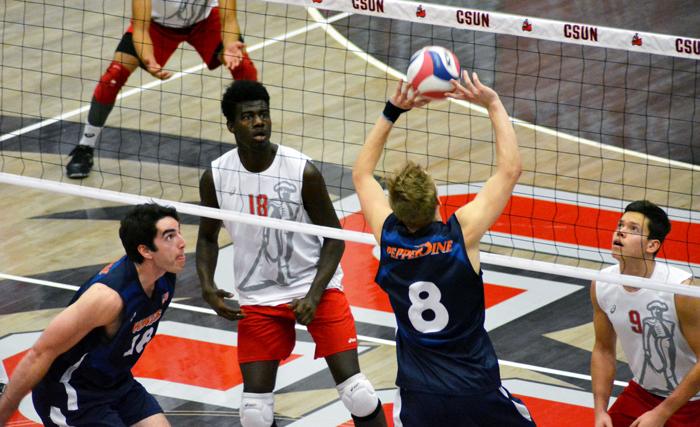 After mixed results the week before, CSUN managed to pull an upset against No. 11 UC Irvine on Wednesday Feb. 17, 2016. (File Photo / Patricia Perdomo / The Sundial)

The game started out with Pepperdine and the Matadors scoring back to back in the first few minutes. The match was only tied for a short time before the Waves took over, scoring multiple points in a row making it 5-3.

Sophomore middle back Josiah Byers kept the Matadors close with his score, leaving them trailing Pepperdine by one point.

CSUN’s defense could not hold off the Waves as they continued to trail 12-9 in the first set. A solid defense and a blocked ball by Byers and junior outside hitter Bradley Sakaida earned the Matadors another point.

Freshman outside hitter Dimitar Kalchev helped the Matadors gain momentum on Pepperdine with two kills later followed by an ace. Kalchev had a total of six kills in the first set. Sophmore outside hitter Arvis Greene, Jr. also scored alongside Kalchev after smacking the ball for a point making the score 18-16 before the Waves took a timeout.

Pepperdine continued to stay ahead of CSUN as the first set went on. The Matadors later scored on a volley after Kalchev saved the ball from going out of bounds with his foot. Kalchev scored once more, but the Matadors could not catch up to the Waves losing the set 25-23.

“I think they came out and played really well, we just kind of couldn’t match it from the start,” said assistant coach Travis Magorien. “I think losing that first set was tough and we kind of couldn’t rebound from there.”

The Waves scored first in the second and third set and continued to dominate the rest of the match. After Greene, Jr. helped tie up the game in the second set, and then shortly take the lead, Pepperdine scored three points in a row. Kalchev answered those points by tying up the game at 6-6.

Pepperdine continued to get the ball past the Matadors, going up 18-10. The Matadors scored five more times before the set was over, but the Waves took it 25-15.

The Matadors did not improve in the third set as Pepperdine went up 6-1 to start off. After CSUN took a timeout, they came back with multiple points and an ace by Green, Jr. making it 7-4. The Matadors went on to score 15 points in the set, again losing to Pepperdine 25-15.

“I think we were really tight. I think coming into this game we weren’t really mentally prepared,” said Byers. “I feel like when we came out we were really distracted and there were a lot of things going on in our heads.”