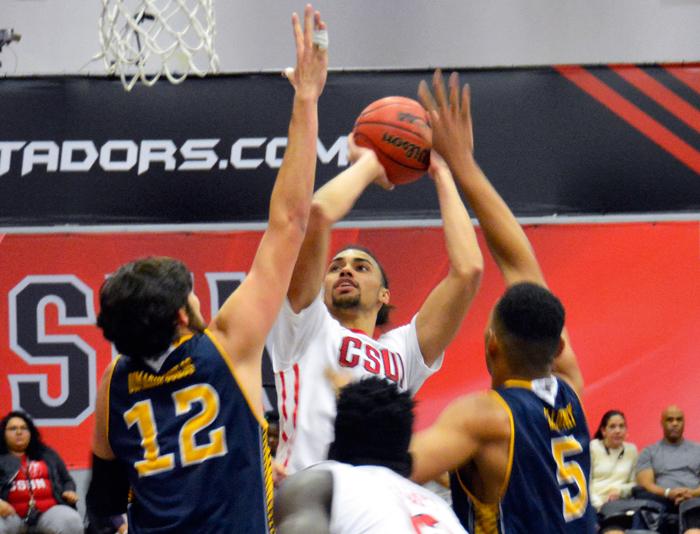 Senior forward Tre Hale-Edmerson closed out his career in the top 10 in blocks, assists, steals and rebounds in CSUN history. (File Photo / Patricia Perdomo / The Sundial)

Coming off a victory in the Matadome, CSUN (8-14, 3-5 Big West) travels to Long Beach State this Saturday and is looking to continue it’s momentum in conference play.

The Matadors overcame late struggles to beat UC Riverside 73-71 in last week’s battle. The efforts were led by Sophmore Michael Warren, who finished the game with 25 points. The game came down to a clutch layup and free throw by Warren that cleaned up the win.

Long Beach State (11-12, 5-3 Big West) is also trending upward after winning two straight games. The 49ers home record (6-2) proves that this weekend will be no easy task for the visiting Matadors. Senior NIck Faust (16.8 points per game) brings his veteran experience and scoring to the 49ers, including 34 points against UCSB, and 28 points versus second-place Hawaii.

The Matadors aren’t lacking in veteran leadership as Senior Tre Hale-Edmerson continues to rise into the CSUN record books, moving into sole possession of fourth place on the all-time games played list.

As a team the Matadors are creating plays collectively and finished last game shooting 52 percent, and 58 percent in the second half. The ball was dropping behind-the-arc as well good as they shot for 40 percent on 3-pointers.

Head coach Reggie Theus was pleased with how well his squad came out.

Although CSUN is barred from postseason play due to a self-imposed ban, it’s make or break for Long Beach State, and the Matadors will look to play spoiler.