CSUN struggles from the free throw line, falls to LBSU 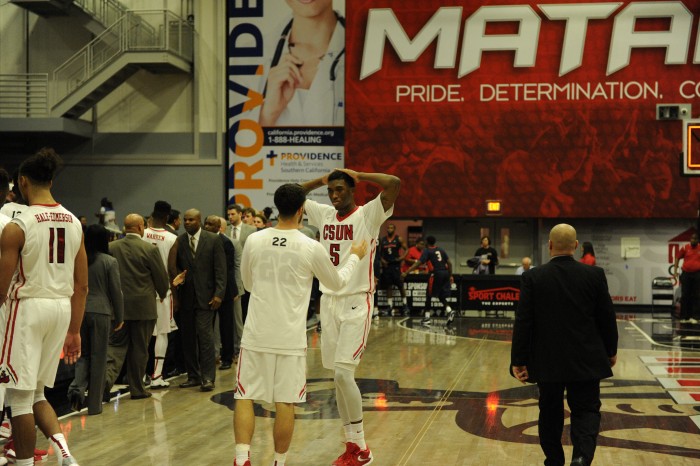 The Matadors were led in scoring by sophomore guard Micheal Warren, who scored 14 points on five-of-nine shooting as well as shooting four-of-five from three to go along with five rebounds.

CSUN and Long Beach State played a hotly-contested first half where neither team was able to get overwhelming control to run away with the game.

After trailing by one the Matadors would go on a 5-0 run capped off by a three-pointer by Warren to take a 23-19 lead with 9:24 to go in the first half.

Minutes later at the 6:54 mark of the first half the Matadors would take their largest lead of the game following a Warren three-pointer that would give them a 30-25 lead.

Long Beach State would come roaring back as they would take a 39-36 lead over the Matadors heading into the half.

The Matadors would begin the second half on a 7-0 run and take a 43-39 lead upon junior guard Kendall Smith scoring two of his game-high 14 points.

However, CSUN would fall behind again, and closest they would get to victory would be at the 3:45 mark in the second half where they nodded the game at 68 following a jumper by sophomore forward Tavrion Dawson.

Dawson was a standout off the bench scoring 13 points on six-of-seven shooting to go along with three rebounds.

Sophomore guard Jerron Wilbut made a three-pointer with 24 seconds left in the game to get the Matadors within two points of Long Beach State making the score 74-76.

But it was a little too late as the Matadors would fail to make a late comeback as they would fall 81-76 to the 49ers.

CSUN will look to rebound against the California State University, Fullerton Titans on Wednesday Feb. 10, at 7 p.m. in the Matadome.