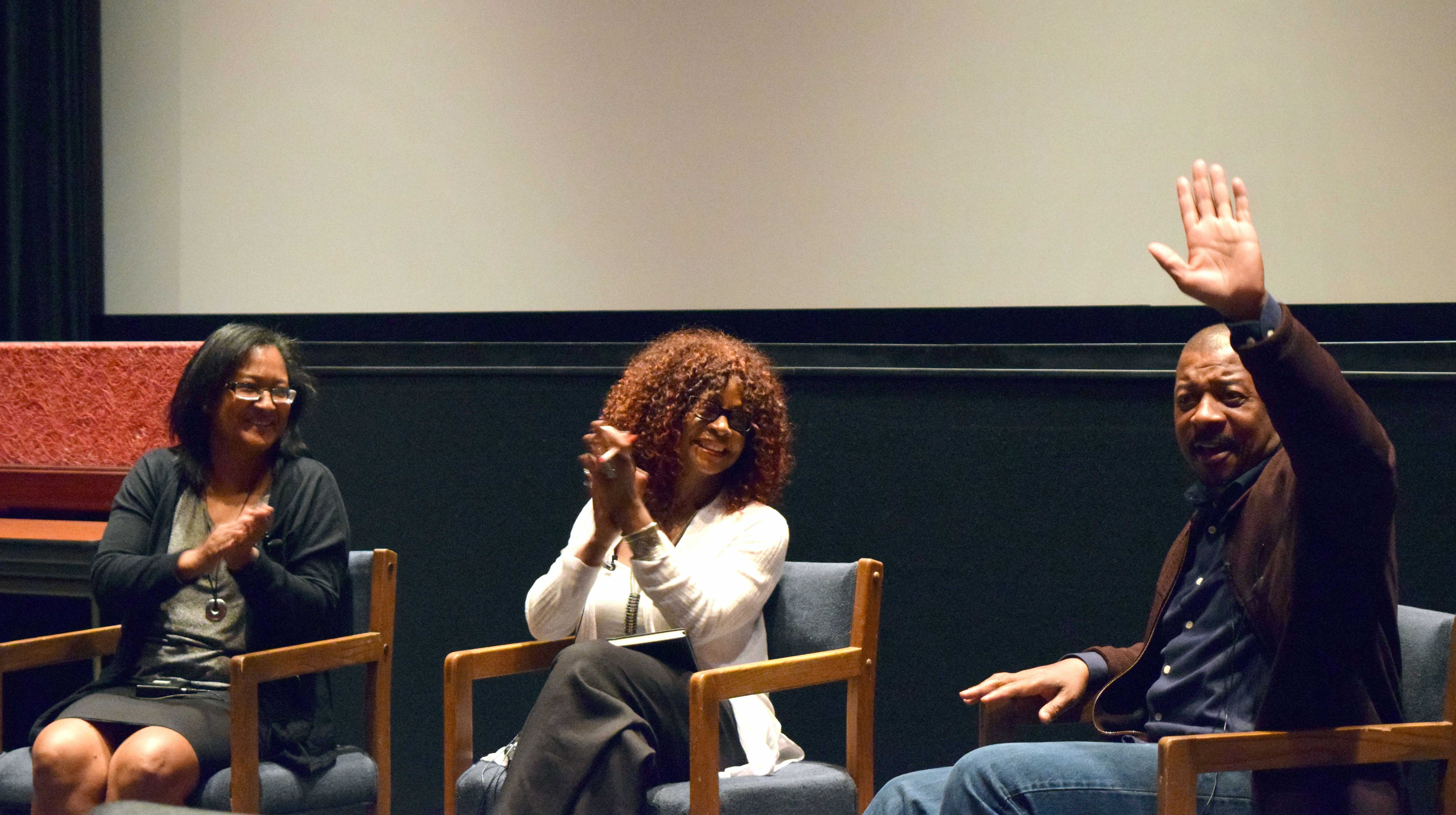 The moderators for the question and answer portion of the "Hollywood Shuffle" screening on Monday, Feb. 8. Frances Gateward, from left, CSUN's option head for media theory and criticism, Sylvia Macauley, department chair and professor of the Africana studies and Robert Townsend, producer, director, co-writer and actor in "Hollywood Shuffle."

The satirical comedy produced in 1987 is a replica of Townsend’s real-life experiences as an African American actor who struggles to find roles in television and film that are not stereotypical of race.

Jeff Kalakay, 33, film production major, who had seen the movie a handful of times said roles included that of a “pimp drug dealer” amongst others like slaves and gang members.

Townsend directed, produced, co-wrote and starred as the main character in “Hollywood Shuffle” and chose to elaborate on the stereotypes seen on screen to broadcast the issues to the public.

He admires Townsend’s “do it yourself kind of attitude,” when it comes to stand up against the demeaning roles blacks are constricted to.

The same issue of race in media is still prominent in Hollywood today, according to Townsend.

Townsend said there are “six movies a year targeting African Americans with leads.” He said three of those movies be nominationed for an Academy Award, such as “The Butler” and “12 Years a Slave.”

Frances Gateward, option head for media theory and critics in CTVA, acknowledges Townsend and his film as one that, “helped inaugurate the renaissance of contemporary black filmmaking.”

“A black actor cannot get an award if he can’t get a role,” Gateward said.

She praises “Hollywood Shuffle” as a “brilliant critique of Hollywood” and uses it in her own classes at CSUN when she teaches about African American directors.

One standout scene in the movie was when white directors demand that Townsend’s character stick his butt, and eyes out and act black.

“I had an audition like that. That’s when I became a filmmaker,” Townsend said.

The film itself was personally-financed by Townsend and took a total of 12 days to shoot, spread over two and a half years and went on to earn over $5 million at the box office.

Currently, Townsend is working on “global distribution” from his phone.

“The game has changed…now it’s social media,” he said. “Every time you tweet on your phone, it counts as a press conference that can be shared globally with millions.”

As a mentor in the CTVA department at CSUN, Townsend noticed that college students use digital devices to communicate and that’s where he is moving his marketing.

In May 2015, Townsend received an honorary Doctor of Fine Arts at CSUN.

“I’ve been blessed to live my dreams…I have no regrets,” Townsend said.

“Hollywood Shuffle” is the first of four films directed by Townsend that will be shown at CSUN in honor of Black history Month. More information on the next three screenings can be found online at the Department of Africana Studies.