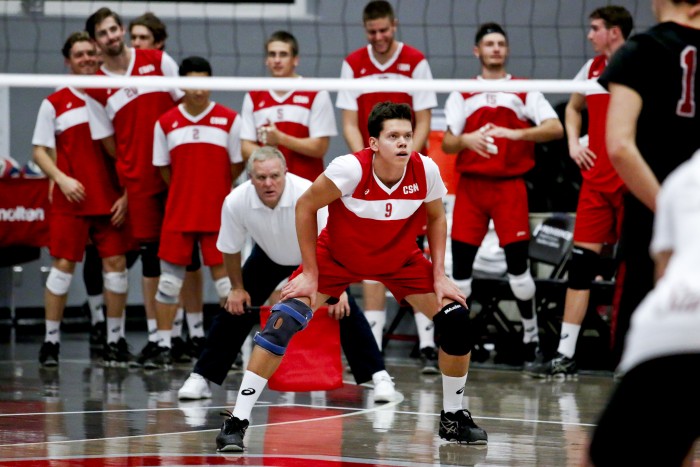 Dimitar Kalchev awaits the serve in a a match against Stanford University on Feb. 6. (David J. Hawkins / The Sundial)

After growing up in Kardzhali, Bulgaria, over 6,000 miles away from the CSUN campus, Dimitar Kalchev’s talent has taken him across the world.

The 6-foot-4-inch outside hitter is already demonstrating his effectiveness on the CSUN men’s volleyball team in his first year, and was integral to CSUN’s best start ever to a season, winning the first seven games.

At only 19-years-old, Kalchev already boasts an impressive volleyball resumé that includes being a member of a beach volleyball team in Bulgaria that finished first in their league in 2013 and 2014, as well as being the most valuable player in the U-22 Beach National Championship.

Despite Kalchev’s success on the beach, he was introduced to volleyball indoors and continues to play it exclusively. However, his heart still lies with beach volleyball.

“Beach volleyball is a little more exciting with it only involving two people on a team,” said Kalchev. “In indoor if you don’t play well they will substitute and find someone to cover you, but in beach there’s a lot more pressure and it’s all up to you to play well.”

Although Kalchev has experienced so much success thus far, he is a neophyte when it comes to the sport itself.

“I was 13 when I started playing, my father thought it would be a good idea because I was the tallest person in our class,” Kalchev said.

After being scouted by both Stanford and Princeton, Kalchev ultimately decided to pursue his education and play at CSUN, where he majors in criminology and criminal justice.

With only six years of volleyball experience under his belt, he still has three more years of eligibility remaining as a Matador. He is also ranked second in the entire NCAA in aces per set at 0.82.

“Just from watching tape we immediately knew that he had a very powerful arm, and that’s not something you can just teach,” said head coach Jeff Campbell. “Dimitar is a competitor, he has taken to the team very well and he is a very hard worker.”

Despite his relative inexperience with the game, Kalchev hopes to continue playing professionally overseas.

In spite of Campbell said Kalchev is someone everyone likes and the team is pleased to have him.

Moving to a completely new country is no easy task for anybody, but Kalchev credits his teammates for helping ease the process and said he was comfortable with his new surroundings within a couple weeks.

“Off the court Dimitar is also a really good guy and has transitioned well, he gets along with a lot of the guys,” teammate Jakub Ciesla said. “It’s been nice having him with us and we’ll see how far he can help take us this season.”