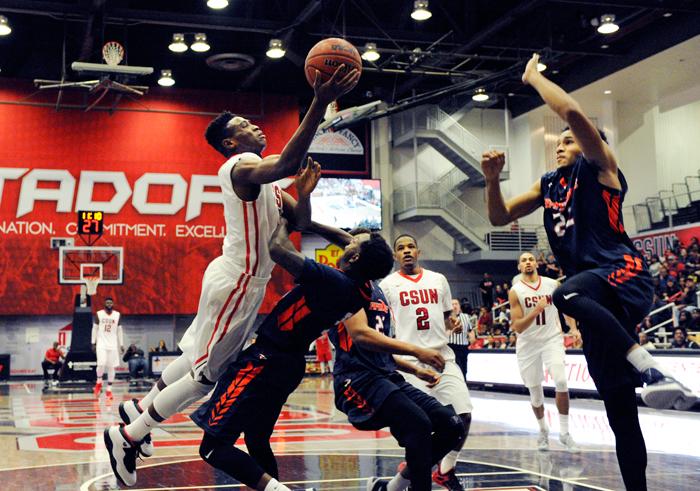 Micheal Warren falls short of making the layup due to Jeremy Major's defense in the paint at The Matadome. (File Photo / Alejandro Aranda / The Sundial)

CSUN is coming off a five-point road loss to the hands of Long Beach State on Saturday night.

CSUF had a 13-point loss on the road to UCSB.

When the Matadors and Titans last squared off on January 9th at the Titan Gym, the Matadors came away with a 85-75 win. The Matadors were led by junior guard Kendall Smith, who scored a team-high 30 points on 7-of-13 shooting.

In the loss Titans junior guard Tre’ Coogins scored a game-high 41 points on 9-of-19 shooting, as well as going a perfect 17-of-17 from the free-throw line.

Going into the showdown at the Matadome, the Matadors leading-scorer is Smith who is averaging 16 points per contest.

In nine Big-West games, CSUN has a negative point differential, getting outscored by an average of 3.7 points per game.

However, CSUF has been worse, getting as they are outscored by a clip of 6.2 points per game.

On the season the Matadors have shot a lowly 32.3 percent from three, while their opponents have torched them from beyond the three-point line making 39.5 percent of their attempts.

The Matadors come into Matadome being led by sophomore guard Micheal Warren, who has averaged 19.5 points per game in his last two contests. Warren has also made 7-of-11 from three over those two games.

CSUF freshman guard Khalil Ahmad has also been playing at a high-level over his last two games, averaging 20 points while making 11-of-13 from the free-throw line.

In what appears to be another high-scoring affair, the Matadors will need to control the pace, as they look to create some separation between them and CSUF in the Big West standings.