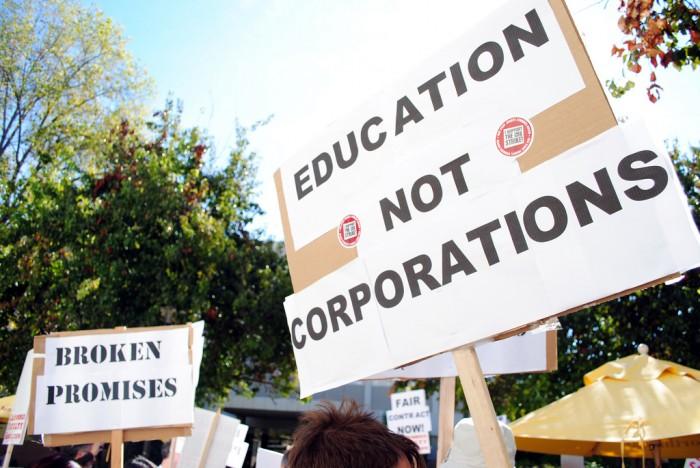 Regular tuition increases have been proposed for the upcoming years, according to CSU Assistant Vice Chancellor for Budget Ryan Storm. Signs held during the CFA informational picket on campus on Nov. 8, 2011. (Andres Aguila/ The Sundial)

If the CFA does go on strike, class cancellation updates would be posted to all campus portal, website, Facebook and Twitter accounts. Students are allowed to cross picket lines on their way to class if they like. The CFA recommends that students be prepared to continue their studies and finals whether or not their classes are meeting.

The impact of a possible strike remains unclear. The CFA only represents about half of the CSU’s 25,000 teaching faculty, according to Molle. However, the CFA explains its members’ picket lines, in conjunction with the support of labor unions that have pledged solidarity with the CFA, would shut down the CSU’s campuses.

Tuition increases were another topic discussed at the web conference.

Regular tuition increases have been proposed for the upcoming years, according to CSU Assistant Vice Chancellor for Budget Ryan Storm. These increases are meant to account for inflation and anticipated growth in upkeep costs for the CSU system’s 23 campuses. Those costs include funding for maintenance projects that were deferred during the worst points of the recession.

“Extended periods without tuition increases are not sustainable,” Storm said.

The CSU also hopes to cut costs by making changes to financial aid. According to Storm, $650 million in unclaimed state funds could be tapped to convert existing student discounts into grants. This change should alleviate costs for the CSU without reducing the amount of financial aid students receive.

These proposals are part of a series of recommendations for the CSU created by the Task Force for a Sustainable Financial Model. Their draft report also suggests that the CSU reduce its reliance on state funding and diversify its funding sources. That notion has drawn concern and protest from student groups that fear what they perceive as the privatization of the CSU system.

The task force also recommended exploring more comprehensive summer scheduling in order to make more efficient use of the CSU’s campuses. This, coupled with initiatives to expand online courses, could make a positive impact on class availability for students struggling to find courses in their majors. The CSU has increased the number of online courses they offer since 2013, according to CSU Chief of Staff for Academic and Student Affairs Nathan Evans.

Despite this, a majority of students still primarily attend classes on campus. The CSU plans to allocate a large portion of their budget to hiring over 1600 new tenure-tracked faculty, according to Evans and Molle.