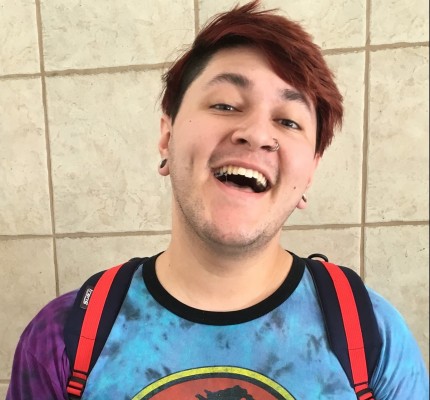 Alan Arellano, 20, is a CSUN student majoring in Educational and Occupational Health. (Ashley Grant / The Sundial)

Alan Arellano, 20, an Environmental and Occupational Health major recently added to his collection of tattoos, bringing the count up to eight tattoos.

Arellano began his tattoo journey at the age of 18.

“My first tattoo was actually covered up,” said Arellano. “I had the La Dispute band logo done in my girlfriend’s sister’s boyfriend’s bedroom and he was a bit buzzed.”

After having a bad tattoo experience in the confines of a bedroom, Arellano decided that the spot would be better used for a tattoo that could display his cultural background.

“Most of my family is Aztec,” he said. “This band is something Aztec warriors would get signifying they went to battle.”

Arellano’s first tattoo can still be seen under the black shading of the band, but after a couple more sessions there will be no traces of it left.

Although Arellano has a few tattoos that he simply got because he liked them or were spur of the moment, three of his tattoos are based around song lyrics that commemorate important moments in his life.

“This is a Brand New lyric from the song ‘Boy Who Blocked His Own Shot,” said Arellano. “I lost my virginity to this song.”

“These are Joyce Manor lyrics. It’s a broken tooth,” he said. “I’ve been dealing with a mental illness for most of my life so I kind of felt like I was a burden to everyone. I felt like a headache…before I realized I’m not.”

With the help of ink, Arellano is able overcome obstacles in life and show the world a glimpse of who he is.