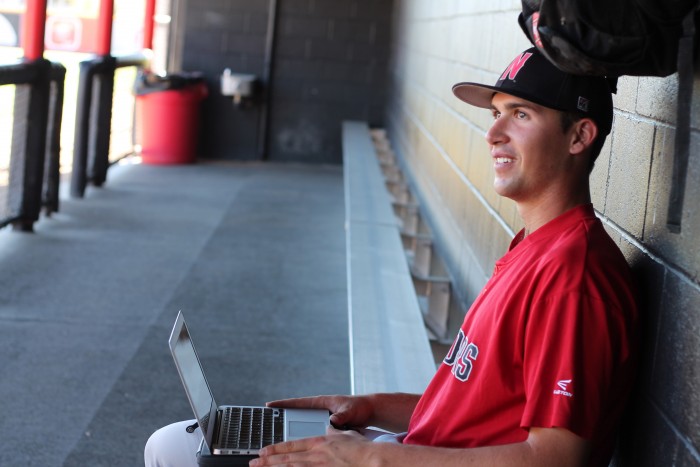 Sophomore infielder Nolan Bumstead is an Engineer major who is balancing baseball and a perfect GPA. (Ashley Grant/The Sundial)

Born and raised in Calgary, Alberta, Nolan Bumstead went from the snowy Canadian mountains to the sunny Southern California beaches to further his athletic and academic success.

The sophomore engineering major earned the Canadian equivalent of a 4.0 while pitching for the Canadian Junior National Team at the Vauxhall Academy of Baseball.

“The academics in high school in Canada are considerably harder than the college courses in the U.S.,” he said. “I played for the Canadian Junior National Team, that whole experience is probably my favorite baseball moment of all time.”

Bumstead, 20, started playing baseball when he was seven. Despite many years of experience, he likes to credit Vauxhall for his increased success.

“The goal of that academy is to give you an opportunity to play in the U.S., because there aren’t collegiate baseball opportunities in Canada,” he said.

The distance between Bumstead’s hometown and Northridge is about 1,500 miles but Bumstead’s decision to make the move after high school was not random.
“While I was in high school, I was contacted by a few coaches and coach [Greg] Moore was one of the first ones,” he said. “I started looking into the program and committed almost right away.”

Bumstead is currently roommates with two of his teammates, red-shirt senior infielder Nolan Flashman and junior pitcher Christian Keamy. Both said Bumstead is quiet and reserved, but they get to experience a side of him that most don’t.

“As a teammate, he’s more reserved but he gets after it on the field,” Keamy said. “We get to see a different part of him being his roommates and all of the efforts he puts off the field; he has one of the highest GPAs on the team and the hardest major.”

Because they have the same first name, Flashman refers to Bumstead as “Bum” and made it clear that he is a guy you want to have on your team and in your life.

“I look for guys that I would go to battle with,” Flashman said. “He’s extremely hard-working, but he’s selfless; if we both have a bad day, he’ll ask me how I’m feeling.”

Flashman says Bumstead cares about everyone before himself.

“And that’s what we want to do, take care of other people first,” Flashman said.

Bumstead hit .284 last season and .273 in conference. He played in 43 games, starting in 36 of them and tied for the team-lead 12 RBI’s in conference play. On the season Bumstead hit two homeruns, the most memorable was his grand slam that helped the Matadors defeat UC Riverside last April.

“He is so tough; he does not go down without a fight,” Flashman said. “He crushed that ball.

“But that’s not what he’s going for; he goes for battling and getting on base,” Flashman said. “He’s not going to let that guy throwing against him beat him.”

Bumstead is currently preparing himself for his second season as a Matador in hopes of making another impact for a group of players who know what he, and the team, are capable of.

“It’ll be interesting to see when other teams show up, how we perform,” Bumstead said. “But I think we have the potential to be a really good team.”

“It’s a hunger of how great we can be and how far we can go,” Flashman said. We are as capable as we want to be.”

It’s up to the team to play hard every day, Flashman says.

With the potential to reach any goal he sets for himself, Bumstead sees a bright future.