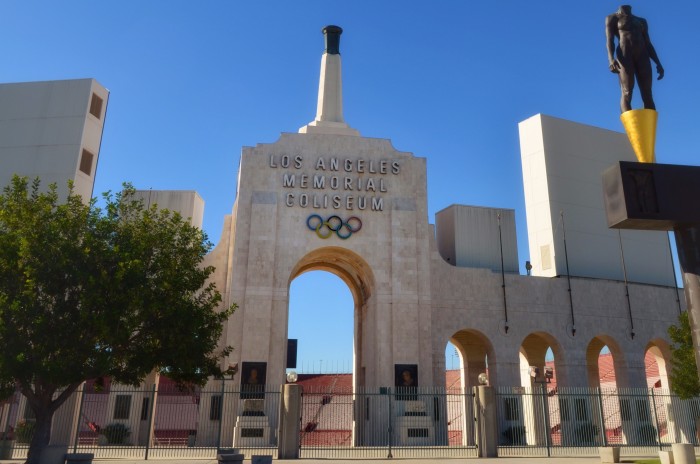 Outside of the Coliseum Photo by Patricia Perdomo

The Los Angeles Memorial Coliseum, one of the country’s most recognized athletic venues, is set for a $270 million restoration plan that could be ready by 2019. According to the University of Southern California news site, some of the planned improvements include an event viewing deck, upgraded suites and press box, lower concourse, and additional aisles.

“As a student, and a die-hard USC fan, I really do love that stadium,” 23-year-old USC communication student Bryan Figueroa said. “It’s such a big part of this school. There’s a lot of pride in knowing your school’s stadium hosted the olympics. A simple upgrade is all it needs.”

The Coliseum first opened in 1923 and became the immediate home of USC’s relatively new football program. Just nine years later, it played host to the 1932 Summer Olympics and would again host the games in 1982. Additionally, it has been home to many teams, including the University of California Los Angeles Bruins, the then LA Raiders and the LA Dodgers.

The marriage between these teams and the stadium was short-lived. The only team to enjoy longevity in the Coliseum besides USC were the LA Rams, who will once again call the coliseum home — just as it did from 1946 to 1979. However, the team’s stay will only last until the new stadium in Inglewood is ready, which is scheduled to be in 2019.

While the outdated seats and cracking cement walls display the Coliseum’s need of renovation, they also serve as a reminder of the stadium’s history and all it has seen.

“Our program plays on national TV every Saturday, and we are really sick of other students and fans making jokes about our field,” USC journalism student Taylor Villanueva said. “The idea of simply improving the Coliseum is great. It’s such an amazing stadium and it just needs some work, and we definitely need to start improving this area.”

Some believe that the updated stadium will help improve the USC campus as will as the surrounding areas.

“A lot of my friends go to USC, and there is a lot to do down there,” CSUN junior Yasamin Roozbeh said. “It’s just really old and kind of beat up. So, with the restoration plan, I’m expecting to see what is really the heart of LA improve in quality.”