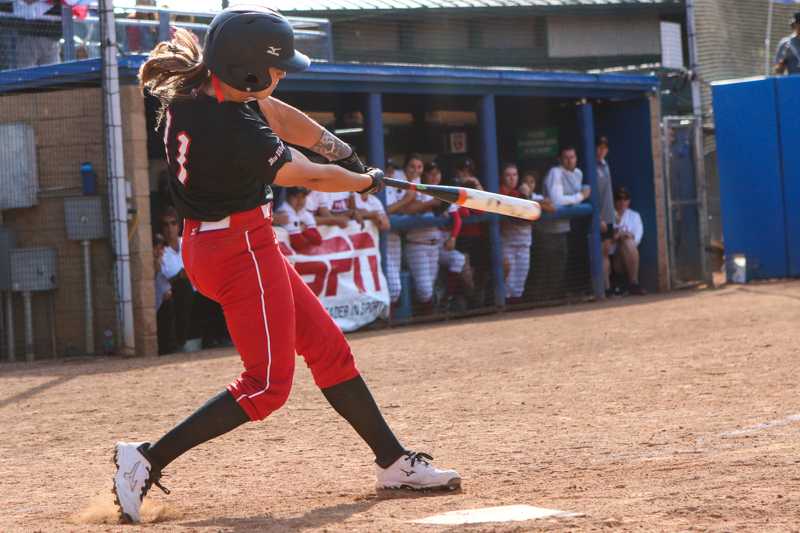 Sophomore catcher Katie Hooper gets a hit against San Diego State University in Los Angeles, California on Sat. May 16, 2015. (File Photo/ The Sundial)

The CSUN softball team kicked off the 2016 season with its first game in the 2016 Kajikawa Classic and a 3-2 victory over the Creighton Bluejays on Friday, Feb. 12 morning in Tempe, Arizona.

The Bluejays started off the game quickly in the top of the first inning as they put together three hits on their way to scoring one run.

The Matadors’ pitching and defense did their job by limiting Creighton’s offense the rest of the way, only allowing one run and six hits combined over the next six innings.

Junior starting pitcher Daphne Pofek, pitched all seven innings for Northridge. She only allowed two earned runs and struck out 10 on the way to earning her first win of the season.

Though Creighton out hit CSUN seven to four, the Matadors’ defense did not make a single error. The Matadors were able to strand seven Bluejays players on base over the course of the game, working their way out of almost every troubling situation.

Horvath struck again in the bottom of the fifth inning with one out. She hit a solo home run to left field, giving the Matadors the go ahead run to secure the victory.

The leadoff hitter was the bright spot for CSUN’s offense, finishing the game hitting two-for-three, with two runs and one RBI.

The second game of the day for CSUN was against Utah State which ended with the same result as the first game, a 3-2 Matadors win. CSUN played with sharp pitching and defensive effort to pull out another one-run victory.

The Matadors started off the game strong offensively, scoring all three runs in the first two innings. Junior center fielder Taylor Glover finished perfect at the plate, collecting half the Matadors’ hits en route to a two-for-two day. She also collected a run and RBI.

Junior starting pitcher Katie Chenault pitched five innings, allowing three hits and striking out five to get her first win of the season.

Chenault struggled with her command as she walked six batters, but she was able to pitch herself out of trouble and allow only one Aggie base runner to score.

Junior Rebecca Bell came in as the relief pitcher for the last two innings, giving up one run and earning her first save of the season for the Matadors.

CSUN continues in the Kajikawa Classic against Cal and Oregon State on Saturday, FEb. 13.