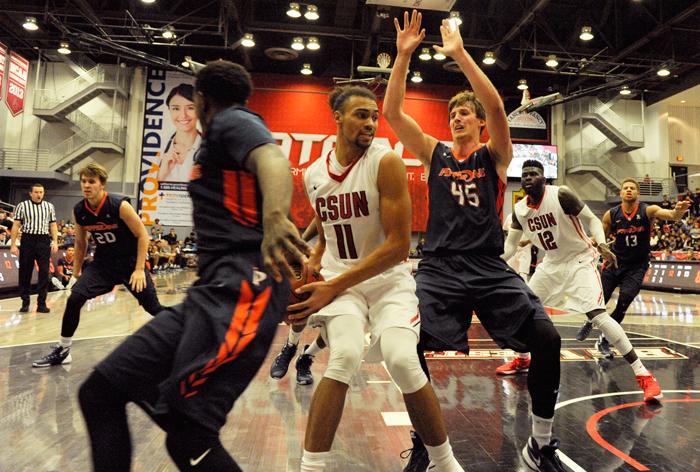 Tre Hale-Edmerson tries to find a way around Jett Raines while deep in the opponents territory at The Matadome. (File Photo / Alejandro Aranda / The Sundial)

UC Irvine used size to their advantage, dominating the Matadors on the glass 49-to-37, while also outscoring CSUN 56-to-34.

UC Irvine would begin the game scoring on their first two possessions to take an early 4-0 lead with 18:42 to go in the first half.

After a UCI turnover the Matadors would get within one after a three-point play by junior guard Aaron Parks to make the score 3-4.

Over the next four minutes, the Anteaters would go on a 13-4 run to take a 17-7 lead over the Matadors.

Following a lay-up from freshman guard Jason Richardson at the 7:27 mark in the first half, the Matadors would battle back to cut the deficit to one making the score 20-21. A lay-up by from sophomore guard Jerron Wilbut then beat the buzzer,causing the Matadors to trail the Anteaters 35-39 at the half.

The Anteaters would come out scorching to begin the second half going on a 14-2 run in the first three and a half minutes to take a 53-37 lead. UC Irvine would keep their foot on the gas by extending their lead to 20 points throughout the second half.

For the first time since the 18:43 mark in the second half the Matadors would get within single-digits following free-throws by junior guard Kendall Smith that would make the score 80-89 with 50 seconds to go in the game.

It would be a little too late as the Matadors would be unable to make a full comeback and they would be swept by the Anteaters.

The Matadors will return to the Matadome to play the University of Hawaii on Thursday, Feb. 18th.