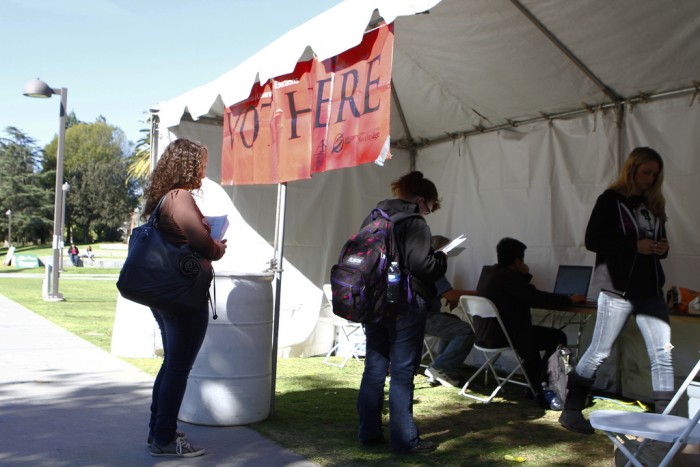 Associated Students begin to prepare for the upcoming elections and to exhort students to go out and vote for new A.S. officials on April 13-14, three months before the elections, according to election chair Luis Molina.

“Every year we are creating promotions and we are hoping that [it] will create better voter turn-out,” Molina said.

For the students who cannot go out and vote in person at the polls, there will be an alternative option, which will be online.

An email will be sent out to students with a link that will take them to the website where they will be able to see the candidates the day of the elections. Also, students will have access to the link through the CSUN’s portal website. This is something new that will be added to this year’s election.

“This is the first year that we are trying this route and we’ll see how it works,” Molina said. ” I think that if it is more present, students are more likely to vote.

Molina is hopeful that the voter turnout will increase this year.

The table below shows the total of voter turnout from previous elections, as well as the budget allocations for each of the last five years at CSUN. The election budget covers advertising and promotion, equipment, food for voters and poll workers, and salaries, which make up the majority of the cost.

Months away from the elections, the candidates are still not yet definite. The window for candidates to apply will open on Feb. 15 and closes on March 14.

For the most part, all the students who pay their tuition are qualified to vote, with the exception of international students according to Molina.

Psychology major Kevin Contreras has not voted in the past elections because he has not received information regarding the elections, nor has he acknowledge who the candidates are, and what they have to offer.

“I believe that A.S. has not done the job to create awareness of the elections in the past years,” Contreras said. “I don’t think there will be a difference this year.”

Molina, on the other hand, believes that A.S. is not completely responsible for that.

“We do encourage the candidates to tell the students to vote, however, we will create awareness so the students know when the election will take place,“ said Molina. “Every year we send ballots via email.”