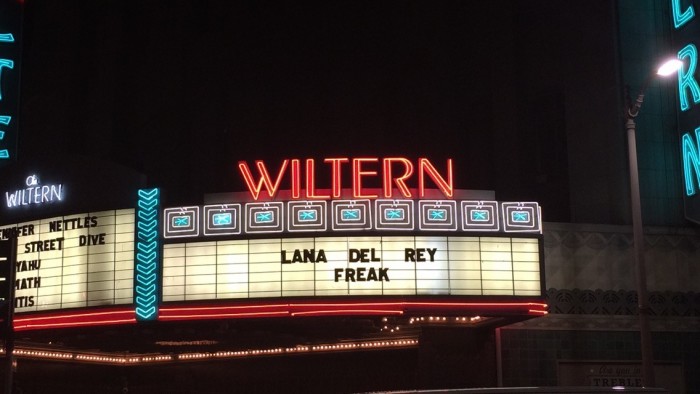 Singer-songwriter Lana Del Rey hosted the premiere of her music video, “Freak,” in front of over 2,000 fans yesterday at the Wiltern on Wilshire Boulevard.

The event, presented by VEVO, included a brief concert and signing, as well as two bars, a merchandise stand and a guest appearance by folk singer-songwriter Joshua Tillman, or Father John Misty.

The mezzanine, loge and floor sections of the venue each sold out to maximum capacity. According to livenation.com, ticket sales for the event sold out within two hours of their release.

At 7 p.m., the venue doors opened and people were ushered in. At this time, the line was wrapped around Wilshire Boulevard to Oxford Street and went down two blocks all the way to 7th. People were walking up and down the lines selling Lana Del Rey t-shirts for $10 to the people in line.

“I’ve just gotten so much from you, so thank you,” Del Rey said as she greeted her fans from the stage. “I know this is a premiere for my video, ‘Freak,’ but I think it wouldn’t be right if I didn’t do a couple songs,” she said as fans erupted with cheers.

Del Rey started the event singing the title song from her latest album, “Honeymoon.” She explained that she was inspired to write the song from her experiences living across the street from the Wiltern when she was younger. She wanted to sing “Honeymoon” to open the event because she wanted to connect the venue’s address with her lyrics about Wilshire Boulevard, she said.

“Why is it important to anyone else if you’re talking about Wilshire Boulevard, but, because it’s special to me, I know it resonates with you,” Del Rey said.

Del Rey then performed the track “West Coast” from her 2014 album “Ultraviolence,” followed by “Video Games” from her 2012 album “Born To Die.”

After her performance, she took her shoes off on stage and stepped down to the floor by her fans in the first row. She signed vinyls of her albums that people held out to her, as well as posters from the Wiltern’s merchandise stand. She shook hands with people in the front of the crowd before stepping back up onto the stage and introducing her video.

The lights dimmed as Del Rey walked off the stage, and the video started playing on the wide screen. The video for “Freak” featured Lana and Father John Misty dancing in a desert and taking hallucinogens. Other girls danced in the background of the video. At the end of the song, the video continued into a dreamlike lullaby featuring an underwater scene with the same characters. Del Rey’s younger sister Chuck Grant also made an appearance underwater in the video. The characters floated under water to “Claire De Lune” until the video ended.

Del Rey walked back out to the stage, accompanied by Father John Misty. She drew inspiration for her video from John Misty’s experience in Topanga at a Taylor Swift concert, she said.

Wiltern venue worker Luke Brooks said fans had begun to line up outside of the venue as early as 12 p.m. with the dedication to be as close to Del Rey as possible. Two police officers were hired for the event to keep the line supervised and flowing smoothly, he said.

“All the girls are dressed up to look like her,” Brooks said. “This is definitely one of the most dedicated crowds I’ve seen.” Ticket prices ranged from $40 to $60 and included either a CD boxed set of “Honeymoon” or a vinyl edition that would be mailed to the purchaser at a later time.

“Thank you for waiting for hours and hours,” Del Rey said as she exited the stage. “I absolutely adore you.”