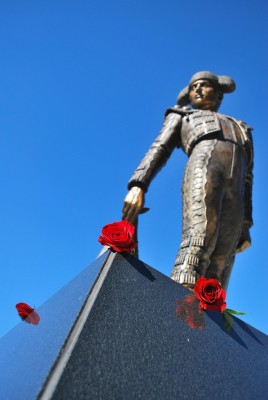 Roses lie at the feet of the Matador Statue. (Christianna Triolo/The Sundial)

CSUN Associated Students hosted their second annual President’s Day event where former A.S. presidents met with current President, Jorge Reyes, and other officials to discuss future plans, receive critique on previous work, and how to improve from past experiences, this Monday.

“The purpose of the event is for the senators and cabinet members of Associated Students to network with past alum and share experiences of the past,” Chief of Staff Valerie Leal said. “Is good to see the senators network, and to hear challenges of things they use to advocate in the past, compared to the things that we are advocating now.”

The event took place at 8:30 a.m. at the Grand Salon. A.S.officials met with former CSUN presidents as they introduced themselves and stated what year they served as president.

The Former presidents received a tour around the Oasis Center and then proceeded with the tradition of the rose, where they offer a rose to the Matador statue to celebrate the achievements at CSUN.

A.S. senators also had the opportunity to spend time with the alumni and talk about their experience of serving for A.S.

Carlos Fuentes, A.S. president from 1978 to 1979, shared his experience of being part of the event.

“It’s very engaging and I really love the opportunity to come back and talk. It’s good to see the freshness and energy that they bring. It’s good to see that they are achieving things that we dreamed of doing,” said Fuentes. “I was one of the first Latinos to be part of A.S. and it was a challenge. Because when you walked in the room it was only white senior leadership and then you knew you were one of the few men of color.”

Fuentes added that he believed that CSUN is doing an excellent job in regards to diversity due to the increase of students of diverse cultures on campus.

President Reyes also believed the event is a great opportunity to learn from past officials and to receive feedback for the job that they are doing.

“It has been an eye-opening and inspiring experience because they were in my shoes a couple years ago,” said Reyes. “There was great advice for certain issues that we are working on campus.”

The event ended with a lunch for the former officials, vice president and president.