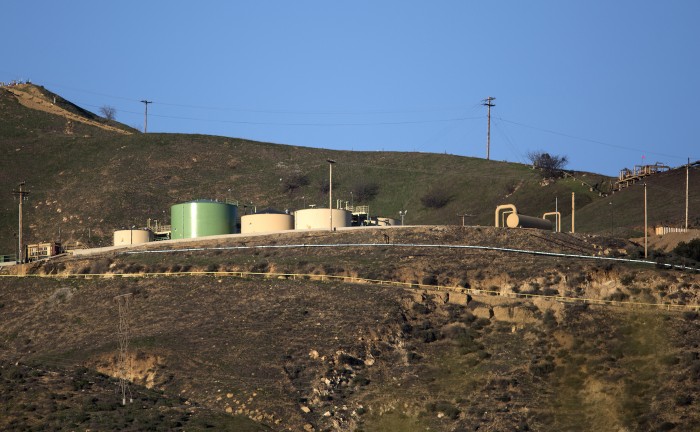 The SoCalGas Aliso Canyon Storage facility in Porter Ranch, Calif., on February 10, 2016. The Southern California Gas Co. announced Thursday, Feb. 11, 2016, it has temporarily controlled the flow of gas from a well in a crucial first step in the effort to stop the leak that has forced thousands to flee their homes. (Brian van der Brug/Los Angeles Times/TNS)

The Southern California Gas Co.’s Aliso Canyon storage facility has temporarily sealed the fumes from the gas leak that has taken its toll on the entire San Fernando Valley, including the CSUN campus.

The gas company did not expect to have the leak fixed until late February, possibly March, but the company announced Feb. 11 that the initial steps toward fixing the leak have been successfully implemented.

According to the Southern California Gas Co., a relief well reaching the base of the damaged well has been dug, and the company has begun to pump “heavy fluids to temporarily control the flow of gas out of the leaking well.”

Although the leak is only temporarily fixed, the process of a more permanent solution began Feb. 12, as SoCalGas pumped cement into the base of the leaking well.

“We will be working with DOGGR [California Division of Oil, Gas and Geothermal Resources] to complete a diagnostic process to confirm that the cementing process was successful and the well is permanently sealed,” Jimmie Cho, SoCal Gas senior vice president, said in a press release.

It could take days before officials confirm the leak to be permanently sealed. Once the well has been permanently sealed, residents that have been relocated to temporary housing will have seven nights to return home.

Temporary or not, the seal has made a noticeable difference for many Porter Ranch residents.

“It definitely smells a lot less, and it seems to be a lot better now,” CSUN senior art major Nicole Dickson said. “I noticed when my mom went to go to the grocery store she used to get nauseous because it smelled so bad, but not so much anymore.”

Despite the steps of progress, many Porter Ranch residents remain concerned for residual toxic residue and are pushing for additional testing from independent experts.

Since the leak began Oct. 23 2015, thousands of residents of Porter Ranch and the surrounding neighborhoods have been relocated to temporary housing. The situation had been going on for so long that on Jan. 6, Gov. Jerry Brown declared it a state of emergency.

Symptoms from those exposed included headaches, nausea, nosebleeds and dizziness, according to the Los Angeles Times.

Public health officials announced the symptoms were due to a putrid additive in the gas. Although the sulfur-like compounds, called mercaptans, are non-toxic and pose no long-term risks, the other gases released were more harmful.

Radon, an odorless, colorless, naturally-occurring radioactive gas that comes from the natural decay of uranium, put a lot of people at risk. Some short-term effects of exposure to the gas include shortness of breath, coughing and headaches, but long-term exposure can lead to lung cancer, according to the California Department of Public Health.

According to Norton, the nearest measurable gas levels were well north of campus, south of state Route 118.

Although the department is doing its due diligence to ensure the campus is safe, some students were still worried about the quality of air on campus and how it could affect their health.

“I’m not a hypochondriac or anything, but when it starts to affect my family personally it’s kind of hard to ignore,” Tyler Lerner, 22-year-old CSUN accounting major, said. “I only live ten minutes from campus and my mom started to wake up with nose bleeds and my little brother has been complaining about a sore throat recently. But I guess if the campus is saying it’s safe to be here, I’ll have to take them at their word.”

Even with some students being worried about their health, there have not been any reported cases of symptoms attributed to the gas leak on campus.

“A check of our electronic records reveals that from the start of the academic year last fall to present, there has been no diagnosed exposure to toxic substances, including methane, benzene, mercaptan and radon,” Norton said.

In an effort to keep the campus as informed as possible about the leak, the university set up information pages on CSUN’s website and sent emails out to everyone.

“CSUN’s Environmental Health and Safety Department has been continually following the gas leak for any potential impacts to our campus community and will continue to do so,” Norton said.

“To date, there have been no measurable readings from the gas leak near the CSUN campus,” Norton said.

On the other hand, even with the websites and the email instructing the campus community on where to direct their concerns, certain students do not pay much attention to the risks.

“I think part of it is the fact that it’s not an everyday visual concern for me,” Elisabeth Bergman, 25-year-old CSUN history major, said. “For me, cigarettes are more of a health concern because I have asthma and I can actually see the smoke around me rather than gas that I can’t see. It’s obviously dangerous, but it doesn’t push into the forefront of my mind.”