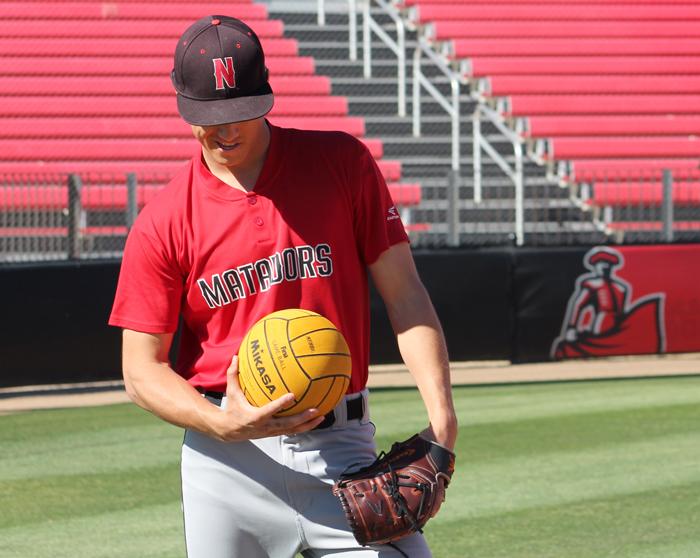 Sophomore Joe Ryan is a former water polo player that uses his water techniques to help him on the baseball field. (Ashley Grant / The Sundial)

Joe Ryan, a 19-year-old right-handed pitcher for the CSUN baseball team sits on the side of the pool at the Student Recreation Center thinking back on what got him where he is today.

He glares at the subtle ripples expanding throughout the water that are reminding him of the countless relationships he has made during his athletic career. In return, the pool water reflects an image of a young man who knows that this is where it all started.

“Water polo has taken all of the anxiety out of my life,” Ryan said. “The sport has a lot of pressure situations which helps me stay relaxed in baseball; I’m never really nervous anymore.”

He said he uses baseball and water polo together for an advantage.

“I feel like I just have fun on the mound,” Ryan said.

The hard-throwing 6-foot-2-inch sophomore can thank water polo for his outstanding arm strength when it comes to weekend afternoon games on the diamond. Yet, Ryan found that competing as a two-sport athlete offered something greater than physical endurance: mental fortitude.

He began his baseball career in little league in San Anselmo, CA., a city less than 40 miles north of San Francisco.

His earliest memory of baseball took place during the misty mornings when his father took him to the field to practice before school. Ryan said the small town and close knit community gave him a sense of pride growing up in the city and local high school.

He always had someone to turn to and role models to look up to.

Ryan played water polo and baseball with the same core group of friends from six-years-old to his senior year at Sir Francis Drake High School. CSUN conditioning coach Jesse DeLong lived down the street from him in their hometown; now the two have reunited in Northridge.

CSUN’s baseball head coach Greg Moore played and later coached at the University of San Francisco when Ryan was just five-years-old. His path was already paved before he even knew it.

Baseball took the backseat by the time Ryan was 12. He joined a newly formed water polo club that traveled and competed around California. The club forever changed Ryan’s athletic future.

“The biggest thing for me at that age with water polo was the cross-training aspect,” he said. “When I played it, my mind was completely off baseball for the majority of the year.”

“It kept my mind clear when I would start season,” he said. “It kept the game of baseball more fun for me.”

His father never pressured him into playing a certain sport, Instead, he let Joe pick what he enjoyed the most.

Once high school baseball started, Ryan encountered yet another obstacle which sharpened his mental capability. In his first two years of high school, he was overshadowed by other teammates who were playing well at the time. He was experiencing adversity at just the right age.

“[In] my junior and senior year, I really set myself apart from the league so it was a good for me to play with those guys early in my high school career,” Ryan said.

He led the state in strikeouts his senior year and received a phone call the following summer — one that every baseball player dreams about.

He was drafted by the San Francisco Giants.

This was the team he grew up watching just across the bridge. Most 18-year-old kids would jump at the first chance to sign their name on a professional ball club’s contract.

Yet, Ryan felt that something was telling him otherwise. He sought advice from other men in the area who had been in his situation before. They told him that college baseball was a better option and would allow him to grow as a player.

“Once I met coach Moore, I knew this was the guy,” Ryan said. “He had this funny relaxed feeling to him, which fits my style of play, so I knew CSUN was the perfect match.”

The recruitment call to pick up the Marin County star could not have worked out better.

Ryan is now surrounded by a coaching staff who shares the same Northern Californian roots as him. He settled in well after finishing the 2015 season with a 3-0 record, one save and a 1.43 ERA through 30 innings.

But the true test for Ryan came in a conference game against Cal State Fullerton early last year.

Matadors’ assistant coach Jordan Twohig said he admired Ryan for his ability to perform under pressure during his first college outing against the powerhouse Titans.

“He came in on a save situation and came out on top,” Twohig said. “He’s got nerves of steel and has the ability to be one of the top pitchers in the conference this year.”

“He’s not afraid of to say what’s on his mind and is aggressive when it comes to his studies and his relationships,” Twohig said. “His teammates respect him because of his work ethic.”

Senior right-handed pitcher Angel Rodriguez said he thinks Ryan has what it takes to get to the next level.

“He finds ways through negative situations and turns them into positive ones,” Rodriguez said. “For a sophomore, [. . .] his head is heading in a right direction and [. . .] I will be there with him [. . .] when he has reached his destination.”

Ryan has the potential to become a force in the Big West Conference. His stellar freshman year has only added confidence to his dangerously focused mental game.

The ripple effect of cross-training with water polo has provided a highly focused mindset enabling Ryan to succeed in high pressured situations.

“I don’t care at all who is on the other side of the field,” Ryan said. “I just know that I’ve done everything I did to prepare for this year — so good luck to whoever else.”