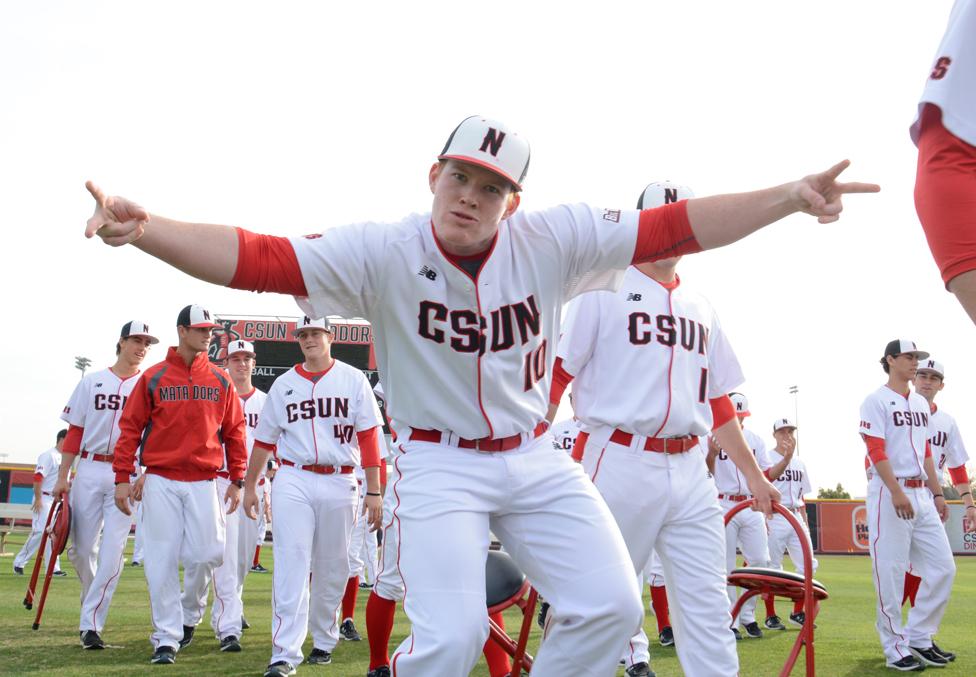 Sophomore Albee Weiss releases some emotions after he finished with his team photograph during Media Day in Matadors Field. (Raul Martinez / The Sundial)

In preparation for the 2016 season, the CSUN baseball team gathered at Matador field to address expectations for their season.

After team photos and individual portraits, players were dispersed into groups of four to meet with assistant coaches, media, and special guest Ross Porter.

During his 28 years as a sports broadcaster, Porter is most known for his partnership in play-by-play broadcasting for the Los Angeles Dodgers with Vin Scully.

In the short meetings, players were able to talk baseball and answer questions about their mindsets for this season.

Cal State Northridge baseball is coming off a 33-24 season and is looking to rebound from an 8-16 record in the Big West conference last season.

“Fullerton is probably favored but [the team] lost some pitching, so I’m excited to see what happens,” he said.

The Titans recently landed the 21st spot in the preseason Top 25 poll on DI baseball.com yet coach Moore is optimistic.

“A lot of people don’t realize that in two years we got it going again,” he said. “Our conference is the big leagues of college baseball and some of the best competition in the country is played here.”

Moore said he hopes the community recognizes that and takes pride in the team.

Sophomore right-handed pitcher Joe Ryan looks to continue where he left off last season. Ryan finished 2015 with a 1.48 ERA in 30 innings on the mound.

He said he is going to what he has always done to prepare himself for this season.

“Our coaches have been great so far getting our bodies ready for this year,” Ryan said. “I’ve also been going to the pool to do swimming exercises which helps me train as a pitcher.”

Ryan was a two-sport athlete before coming to CSUN. He played baseball and water polo for Drake High School in Northern California.

Ryan also said it has been a great experience training with Matador baseball conditioning coach Jesse DeLong. The coach and player lived down the street from each other in Marin County, California.

Temecula native and sophomore center fielder, Justin Toerner, adds versatility to the Matador lineup with his ability to perform as a five-tool player. Toerner batted .265 in 2015 finishing third on the team in RBI’s with a perfect 1.000 fielding percentage.

He also had 11 stolen bases in a four-way tie for the team leader.

“My personal goal for this season is to help my team win in any way possible,” Toerner said. “We worked really hard on team chemistry this past offseason, so we trust each other very well and I think it shows on the field.”

As a freshman, Toerner tied for the team lead in sacrifice flys and was able to score 27 times.

The first game of the season will be at Matador Field on Feb. 19 against Cal State Bakersfield.