Students get the rundown on the importance of inclusive language 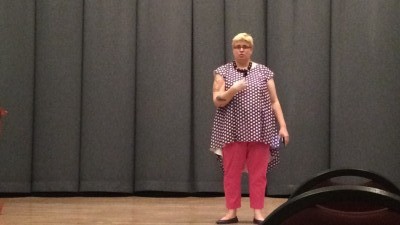 Jessica Pettitt gives examples from her life of offensive language and how it could be avoided in the future when thinking consciously.

Students learned the do’s and don’t s of using inclusive language from Diversity Educator Jessica Pettitt as a part of CSUN’s “Change Your Words, Change the World” week at the USU’s Grand Salon.

“I was thinking of some examples, like the phrase ‘man up,'” Morgan said. “This phrase is used by people a lot but we never stop to think that it might be offensive to some people.”

The discussion took place on Tuesday in the Grand Salon of the USU in front of an audience of 16 people and included flyers, notes and refreshments for visitors.

The discussion opened with an explanation of the ways people use language and how it can be interpreted to those from different backgrounds.

“Language can be slippery, and we’re responsible for the language that we use,” Pettitt said.

Inclusive language requires an individual to refrain from using a language that reflects stereotypes, discrimination, or judgmental views, according to Pettitt.

Pettitt explained how individuals may identify with a certain word or phrase and will apply those descriptions to their own identity, regardless if its positive or not. This can cause an individual to feel offended when others use that particular language in a different or derogatory way.

The conversation was then directed towards explaining the differences between conscious and unconscious use of language.

Words can hold multiple meanings, including slang, she said. When an individual uses slang, they may unintentionally say something that could be offensive to others, making it important to be more aware of the meanings of the words you use, Pettitt explained.

The discussion then turned to understanding people’s intentions when dealing with language and harmful words.

A person can normally tell an individual’s intentions in the words they use by their intonation, Pettitt explained.

Pettitt, who identifies as a lesbian, then described a personal experience of being called a dike by a stranger. A word Pettitt once found empowering, became offensive when the stranger said it as an insult.

The same concept can be applied to words such as retarded or gay and even pronouns like he or she, Pettitt explained.

“We think we know what language someone identifies with, but often times we actually don’t,” Pettitt said.

The most important thing to understand about using inclusive language is how individuals can be “differently right,” Pettitt explained. People with a different perspective can help give you new insight.

“Find people whose strengths are your weaknesses,” Pettitt said. “Inviting new education around language is a resource for personal growth.”

CSUN Recreation and Tourism major Tania Dominguez hoped the event made people more aware of the words they use.

“Some people pick up words and phrases that their friends make to seem cool, but the meaning behind them is offensive,” Dominguez said.

At the end of the lecture, Pettitt gave her cell phone number to the audience.

“I want you to be able to talk to me whenever you need to,” Pettitt said.

Questions regarding stereotypes were answered and pointers were given on how to approach a scenario where someone uses offensive language.

Wrapping up the speech, Pettitt emphasized the importance of listening and being more conscious of what words mean.

“Expand your circle to people that are different than you and it will create a circle of people working together, inclusively,” Pettitt said.