The Matadors take down No. 11 UC Irvine in four sets at the Matadome 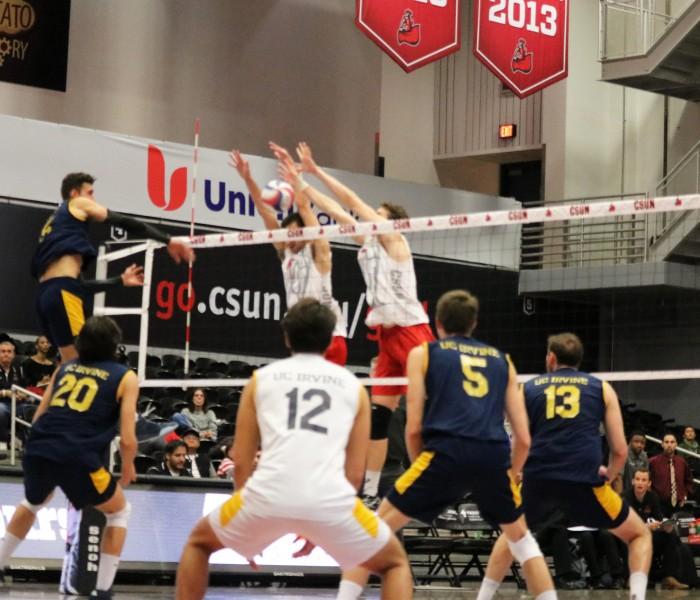 The first was close in the beginning, as the Matadors men’s volleyball stayed tied with UC Irvine until a block from Josiah Byers gave CSUN the one-point advantage at 5-4. The block was followed by junior outside hitter Jakub Ciesla scoring the first service ace of the match. Ciesla led the team in kills for the first set with a total of four.

CSUN continued to lead the set with multiple kills by Ciesla then a great block gave them the three-point advantage at 18-15.

The Anteaters took a timeout before CSUN scored two kills including one by Dimitar Kalchev. Irvine aggressively came back to tie up the score at 20-20.

“I think it was a team effort and we all played great,” said Freshman Dimitar Kalchev. “We followed the coaches instructions.”

CSUN jumped out to a quick lead in the second set, 4-1.

The Anteaters rallied, tying the score 5-5. Both teams battled to take the lead as they stay tied up with the score at 10-10.

UC Irvine took the lead and had the advantage over CSUN until Kalchev earned his second ace of the night. This put CSUN up 16-15. The Matadors had two kills and two more ace’s before the Anteaters took a time out. CSUN had the advantage at 20-15.

“I think our serving put them kind of on their heels in set two,” said head coach Jeff Campbell. “I thought our serving was the biggest difference.”

However, the Matadors weren’t able to get the sweep, struggling in the third set.

The set went back and forth between both teams and ended up tied at 5-5. Byers helped get the Matadors ahead with a kill followed by two diving saves in a row from CJ Suarez. The Matadors lead 7-5.

Both teams continued to battle for the lead as it was close near the end of the set. They were nodded at 20-20 before the anteaters scored giving them the one-point advantage. The Anteaters had a bad serve giving CSUN the point and tying the game at 21-21.

UC Irvine ended up winning set three 25-23. Ciesla had 20 kills in this set followed by nine from Byers.

In the final set, the teams stayed close to each other in points up until they were both tied at 20-20. Byers made multiple kills at the end of the set keeping CSUN ahead. The Matadors defeated the Anteaters and won the match and set at 25-21.

“We came out and it looked like we wanted it more than they did,” said senior Brian O’Gorman. “We were ready for this and we were hungry for this after the loss Friday night. We weren’t going to let another loss happen this week.”