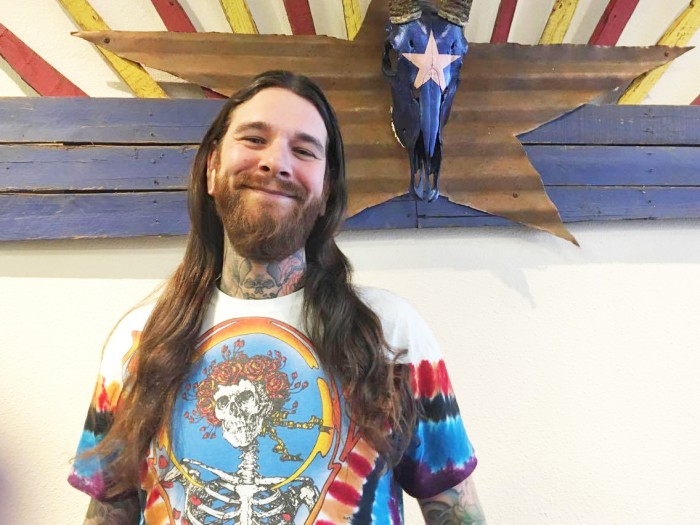 For some, tattoos and motorcycles are associated with criminals and tough guys, but tattoo artist Nicolas Budner has challenged these stereotypes.

Budner, 34, is a local tattooist with long brown hair flowing past his shoulders, who speaks in a smooth and laid back tone and loves to live his ‘gypsy life.’

With tattoos covering the majority of his body, some people may think he is the typical tattooed bad boy, but once they hear Budner speak and see the way he carries himself, the image of him tends to change.

Growing up, Budner was never in one place for very long. With his mother working as a flight attendant he found himself constantly jumping from state to state and country to country.

Although Budner lived in many locations, he managed to always find his way back home to the San Fernando Valley, where he was originally born and raised.

With a love for creating custom bikes and taking long rides along Mulholland Highway, Budner has always enjoyed being a part of the biker community.

At 18, and fresh out of high school, Budner enrolled himself into Motorcycle Mechanics Institute (MMI), in Phoenix, Arizona, to become a certified Harley-Davidson mechanic.

“I’ve been riding motorcycles my whole life,” said Budner. “But I enjoy building them, mainly for myself, sometimes for other people. That was going more my major force.”

Budner thought getting certified would be great to have under his belt, but the idea of tattooing soon took over his career plans and motorcycles became more of a hobby.

“I like to tell people that I met the wrong people at the right time, that’s what it’s like getting in this industry,” Budner said. “A lot of people spend years hunting down apprenticeships and I didn’t have that problem at all. I really kind of just breezed on into it.”

While doing his apprenticeship, Budner found himself tattooing his first major piece on the chest of his long time friend and current roommate, John.

“I got to do my first tattoo on my best friend,” Budner said, as a big smile came over his face. “I went in way over my head and it was just way out of my realm, but I was so gung-ho about it.”

It was a tattoo of two sparrows with ribbons that say ‘Live Fast Die Young’.

“John won’t let me fix it, he won’t let me touch it up. It still looks like what a first-time tattoo would look like,” he said.

Over the many years, Budner’s tattooing skills have transformed drastically with the help of one specific tattoo artist that took him in when he was new to the industry.

“One guy that I can most definitely say helped shape my style of art and I really looked up to was Ryan Downie,” said Budner. “He’s a tattoo artist out of Vegas, originally from Long Beach. I met him early on in my career and his artwork and style, I just dug it all.”

With the influence of Downie, Budner found his work to be focused essentially in Japanese and Traditional Americana and continues to pursue those genres of art.

Over the last 16 years, Budner has worked in almost all of the tattoo shops in the San Fernando Valley, but one shop he seemed to always come back to and is currently employed at, is Kathouse Inc., in Northridge.

Kathouse Inc. is a small town shop that has been in business for 11 years and is located near the CSUN campus, at the corner of Lindley and Parthenia.

Shop owner Cooper has been friends with Budner for close to 13 years and when it came time to hire someone new, Cooper offered the position to him.

“I pick all my artists,” said Cooper. “I’m very careful. I pick good people with strong portfolios. They are always happy and in a good mood, you won’t get attitude from this shop.”

Budner’s carefree attitude helped him work with various customers and fellow tattoo artists as he has the ability to keep people feeling at ease.

“I have a gift for gab, honestly, that’s what helped me get into this industry,” Budner said. “I can connect with somebody upon meeting them. I like to say I am the man of infinite hippy patience. I’ve only ever had a break down with one guy. It’s a rare thing.”

With such a captivating and calm persona, Budner has been able to provide a comfortable atmosphere for his clients, which in turn has given him a reputation that most tattoo artists strive for.

“When I walked in I was nervous, but I was soon relaxed when I met my artist Budner,” said Sydney A., a Beverly Hills passerby. “He was the absolute greatest and worked so well with my ideas. I couldn’t stop smiling afterward.” Customers that leave the tattoo shop happy and smiling are what Budner loves the most about his job.

“Honestly, the reason I tattoo is that little glimmer moment, right after you’re done tattooing and they’re looking in the mirror and they’re seeing it,” Budner said. “You start to see their face change. They are happy. It makes it all worth it.”

After all the years of tattooing, Budner still finds happiness in his job every single day and manages to continue to take rides out on the open road on his Harley whenever he has free time.