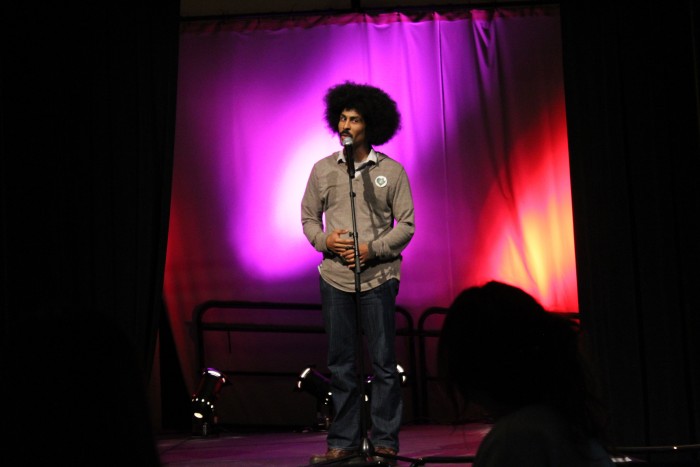 Host of Change Your Words, Sean HIll, speaking to the crown on Wednesday night, February 17. (James Fike / The Sundial)

The importance of inclusive language shined through students in the form of music and poetry Wednesday night in the Northridge Center for CSUN’s third “Change Your Words” event called “Espressions.”

Espressions, held every year at CSUN, was put together by current and former students. This year’s event featured an open mic hosted by former CSUN English major Sean Hill.

Many individuals participated in the open mic by performing songs they wrote, performing spoken verse and reciting poetry. Refreshments and raffle tickets were given to each person who attended.

The first performers signed up for the open mic prior to the event, and then the mic was opened to any member of the audience who wished to share.

“It’s beautiful when people come up here and they didn’t think they were going to do this,” Hill said as he introduced new performers to the stage.

For some individuals, Espressions was significant to them because it was the first time they had ever read poetry aloud.

Gabriel Luansing, president of CSUN’s hip-hop culture club, also performed a piece and explained how events like Espressions helped students feel like they have a place to showcase their talent.

“It’s a cool thing for people to want to come together and say, ‘Hey, this is what we do.’ I know for people like our group, we respect that,” Luansing said.

Other attendees who didn’t perform still enjoyed the event and appreciated the concept behind it.

Amber Barboza, psychology major, regularly attends Espressions events at CSUN because of how they brings the community together.

“It gives students an outlet to express themselves and show off their individual uniqueness,” Barboza said.

Sociology major Nadine Lomeli said that she believes Espressions is an event where CSUN comes together for something that students believe in.

“At events like this, you can see what’s going on on campus behind the busy, hectic work,” Lomeli said. “You get to see a different side of them [students].”

Some students attended Espressions in the hope of fueling their own creativity with the inspiration acquired from the performers.

“Others’ talent can help influence your own,” kinesiology major Oscar Pralta said.

In addition to hosting, Hill also shared two poems of his own with the audience while expressing how poetry and music are a way for some individuals to share personal stories about their lives in a therapeutic way.

Hill’s own inspiration for writing poems comes from family, things in his life that impacted him and worldly issues he thinks will inspire people.

Hill encouraged the audience and performers to keep expressing themselves by speaking out inclusively.

“Getting up here on this stage and taking the risk of being looked down on means that you are gaining strength and overcoming fears,” Hill said.