Matadors take late lead but can’t hold on against Hawaii 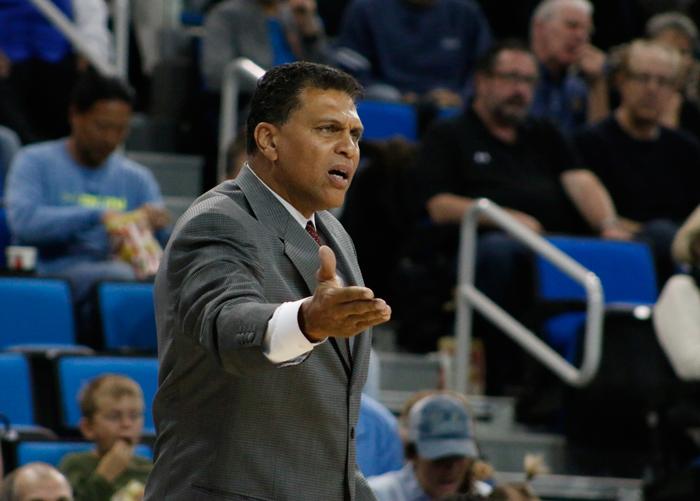 CSUN captured the lead twice in the last five minutes, but once again, faltered in the closing moments (File Photo / Raul Martinez / The Sundial)

CSUN men’s basketball lost a close contest to the University of Hawaii Rainbow Warriors 69-63 in a game that was decided in the final minute.

“We’re right there against a good team, I just wanna tell these guys to stay in it, stick together because we’re right there” said junior guard Aaron Parks. “We had small margins of error and we gotta come ready to play at Cal Poly”.

For the game CSUN shot poorly from field, shooting 37.5 percent from the field compared to 46.8 percent shooting from Hawaii.

The Matadors also shot poorly from three making only 1-of-14 attempts.

Hawaii out-rebounded the Matadors 40-to-29, but the Matadors were able to keep the game close by forcing 20 Rainbow Warrior turnovers.

CSUN couldn’t slow down Hawaii forward Stefan Jankovic who scored 34 points on 12-of-13 shooting and showed propensity to beat Matador bigs off the dribble.

“It was one of those grind-it-out games and in the end they have a guy who can take you off the dribble and get to the basket” said CSUN head coach Reggie Theus. “We don’t have one of those guys.”

Senior forward Hale-Edmerson struggled with foul trouble all night, eventually fouling out in the second half.

The game displayed CSUN’s grit and tenacity, but also showed their inability to close late.

Throughout the season the Matadors have remained competitive, but have failed to hold leads when it matters most, with this loss marking the eighth time this season that CSUN has lost by six points or less.

“We battled, their the number one team in the conference and they came to our house and barely beat us” said junior guard Kendall Smith. “We’re gonna look over the film, make adjustments and we’ll see them again in a couple weeks.”

CSUN began the game sluggishly, not scoring their first basket until 3:17 into the game on a lay-up by Parks to knot the game at two.

At the 12:43 mark the Matadors would get within one following Parks getting out on the fast break by getting a steal then taking it for a lay-up to make the score 12-13.

The Matadors would cut the Rainbow Warriors’ lead to one on multiple occasions as they would trade baskets with Hawaii for much of the second half.

Following a lay-up by sophomore forward Tavrion Dawson with five seconds to go in the first half, the Matadors would trail the Rainbow Warriors 32-26.

Dawson was making his first start of the season in conference play, he was starting in place of senior center Olalekan Ajayi.

With 15:47 to go in the second half, the Matadors would trail Hawaii by three following free-throws by sophomore forward Zacarry Douglas to make the score 34-37.

Over the next 3:11, the Rainbow Warriors would score six unanswered to push their lead to nine making the score 43-34.

That lead was short-lived as Hawaii nodded the game at 51 shortly thereafter.

Things began to unravel when Hale-Edmerson was called for a foul late and compounded that with a technical foul.

“When we lost Tre [Hale-Edmerson] it really hurt us in the post-area,” said Theus.

Following the free-throws by Hawaii, the Rainbow Warriors would take a 58-53 lead.

Still, Matadors would tie the game at 60 following a Parks free-throw with less than two minutes remaining

Moments later, sophomore guard Jerron Wilbut would give the Matadors a 63-62 lead following a pair of free-throws.

But like several games this season, CSUN would have their hearts broken at the end.

On the ensuing possession, CSUN gave up an open 3-pointer, giving Hawaii a 63-65 lead they wouldn’t relinquish.

For their game the Matadors will travel to play the Cal Poly Mustangs on Saturday, February 20th at 7 p.m.