Students learn the power of their words 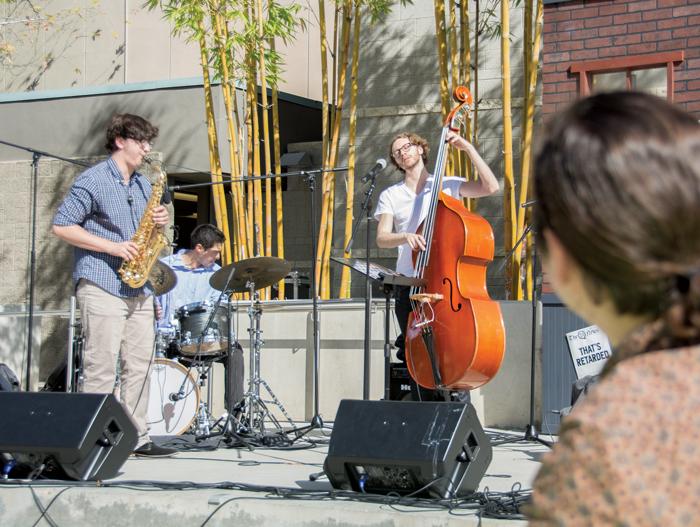 Food, music, live poetry, crafts and even a ball pit were just a few of the activities Thursday that wrapped up the end of the second annual “Change your words, change the world” week, hosted by the USU to spread the importance of using inclusive words.

“We wanted people to really realize and recognize the power behind their words and how they might be offensive to certain communities and individuals,” Randy Sorensen, USU event supervisor, said.

To do this, the USU held a series of various activities throughout the week to create awareness. This year, events included speaker Jessica Pettitt giving a lecture on inclusive speech as well as those allowing students to express words they found offensive, including a poetry night with an open mic.

“The focus of this year, compared to the last, is that we are taking a deeper and closer look at what the exact words students are finding offensive,” Sorensen said. “Last year we focused on talking about what inclusive language meant to them. Now we are taking a deeper look at what these words are that our students and our community are finding directly offensive to them.”

To do this, the USU created posters around campus that featured offensive words and games to directly confront students on potentially offensive language.

“I definitely got the message of the event, especially with the posters around here showing all the common phrases that people say without knowing what they really mean,” CSUN freshman theatre major Elliot Maynes said. “I actually really like this, because I heard a lot of this stuff growing up like, ‘that’s so gay’ or ‘that’s retarded,’ as I was learning what this stuff means and never thought that it mattered until recently.”

At the campaign’s last event on Thursday, “The Soapbox: A Celebration of Free & Inclusive Speech,” multiple activities were created to help spread awareness.

These activities included a craft corner where individuals could make coasters with Scrabble pieces and a photo booth where individuals were provided with a customizable chalkboard frame where they could write words they found offensive and then take photos with.

Students were also encouraged to jump into a ball pit together to find and answer questions regarding inclusive language buried within.

T-shirts, pins, Chap Stick and stickers were also handed out to students who participated in the “Wheel of Words,” a play on the “Wheel of Fortune.” Students would express their feelings or experiences with whichever offensive word the wheel landed on.

“I was just walking by, but I’m glad I stopped,” Bedrosian said. “I really like the meaning behind it. It gets people to think.”

The games were just one of the ways the USU tried to reach out to students. The words posted around campus and included in the activities were not selected at random.

As Thursday’s event wrapped up, CSUN’s Poetry club, the TAKE cast and a live jazz band performed as free food and drinks were served.

The entire event was initially inspired by the University of Maryland’s own inclusive language campaign, “Would You Say That if…” but has now transformed into bigger plans for the USU.

“With the years to come, we are looking to not just have it to be a week-long event once a year, but more of a year round campaign that’s kind of settled everywhere,” Sorensen said. “So there might be certain inclusive language themed events, lectures, education sessions or something we hope to launch in the future. There will be a lot of changes; it could be a little bit of everywhere.”