The Downtown Art Walk: When Art Stays Up Late 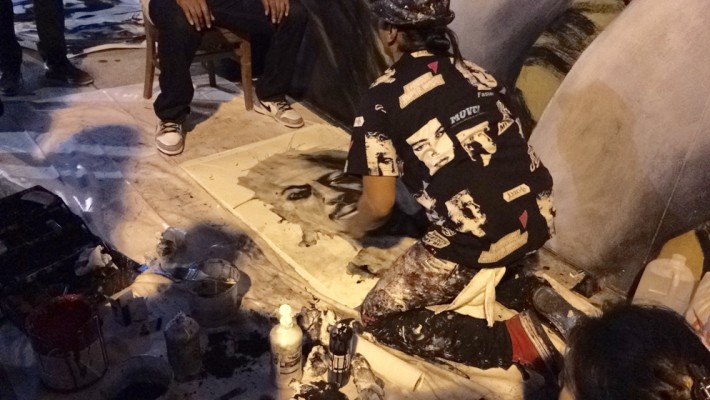 Downtown Los Angeles held its monthly “Downtown Art Walk” yesterday to encourage people to appreciate the art of the city.

The event takes place every second Thursday of each month and is located between 4th and 7th streets, and Spring and Main. Each month the art walk invites over 50 downtown unique art galleries and artists to stay open late in the attempt to give those with busy schedules a chance to see the exhibits. Visitors can see galleries, public art, murals, sculptures, and even street artists and performers on a self-guided tour of Downtown.

The art walk was originally founded in 2004, on gallery row in the hope of encouraging people to visit and appreciate Downtown LA. Since then, it has grown into one of LA’s most popular attractions, bringing in over 2,500 guests per month. Over a million dollars worth of entertainment is provided free to visitors for the sole purpose of bringing the community together through the appreciation of art.

Doronio shared his experiences working in the art walk in the public art exhibit called “J.R.” The event featured paintings and drawings, mostly of human hearts with inspirational messages. Doronio attended CSUN in 2005 as a biology major. It didn’t take him long before he realized he wanted to change his major to art.

Doronio has shown his art in the art walk ever since it started and goes by the title “Thirdeyedea.” He creates graphic designs, interactive art, paintings, and drawings.

“Now that there’s more bars and shops parallel to the art walk, I think that brought in more people,” Doronio said. “I think it’s definitely beneficial to the community because it brings a nicer crowd to Downtown than there used to be years ago.”

Most art galleries in Downtown open around 12 p.m. and close at 5 p.m. For the art walk, galleries will stay open until 10 p.m., rain or shine. Some galleries even stay open until 12 a.m., but it depends on the amount of people attending. The art walk is a nonprofit event funded by donors, sponsors, and art fans that wish to provide their contributions. Maps of the art walk are available on the website, downtownartwak.org, or at the Art Walk Lounge at 634 S. Spring Street.

“I wouldn’t say I’m working here because I enjoy it so much,” said Michael Wisnieux of WIZNU Studio and Gallery.

Wisnieux hosted the exhibit of his photography of musicians on Spring Street. He began setting up for the event at 2 p.m. and spent over two hours putting the exhibit together, he added.

“I’m thrilled to be a part of an event that’s transformed so much of DTLA,” said Wisnieux

Wisnieux gave out pamphlets and social media contacts to anyone who visited. He explained that the process of developing his photos for the exhibit took place mostly in photo labs. He began his career in photography at 14 and draws inspiration from the music that moves him, he said.

Among the other surprises throughout the art walk, people can find street performers and artists working right on the sidewalk with an audience around them. There is also an area where food trucks are parked with all different types of food. There is a DJ playing music and tables where people can sit and eat.

A number of bars and restaurants are also located throughout the art walk. “I never get to go because I’m always needed here,” said bartender Sam Davis. Davis works at the exotic restaurant, Mrs. Fish, which features a live band and an aquarium extending around the ceiling. The restaurant is a popular attraction for art walk-goers, he said.

Police officer Manuel Melgoza said he had been assigned to patrol the area all week, and had seen a lot of people enjoying themselves. “When the weather’s right, it’s a good way to bring people out of their houses,” Melgoza said. College students attend the event, as well as families with kids, he said.

Cerritos resident Jessica Leal said she has been to the art walk three times and has noticed a change in the types of people attending each year.

“Before you would see more hoodlums and it felt dangerous,” said Leal. “It’s nice to see older and more mature people now who take the art seriously.”

People of all ages are invited to experience the art walk and culture of Downtown every month. Other information about restaurants, parking, and galleries can be found on the website.