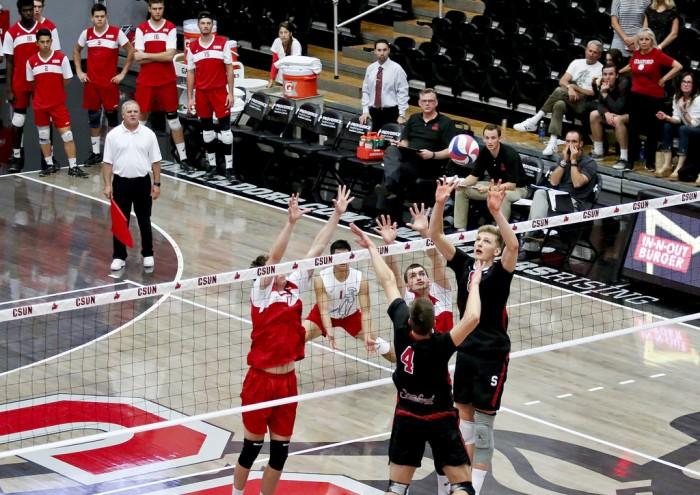 CSUN was able to get an easy win against UC San Diego on Feb. 19, 2016. None of the three sets were closer than eight points. (File Photo / David Hawkins / The Sundial)

The victory also evened the Matadors’ record in MPSF play at 5-5.

Sophomore middle blocker Josiah Byers was integral for CSUN, as he led the team with nine kills (.900) and seven total blocks. The Matadors appeared to feed off of his energy on several occasions, while he contributed crucial kills and blocks multiple times throughout the game.

“I just told my setters to set me high because I can jump high and kill the ball over everyone,”he said. “That’s what I do, just go out there and think like a caveman — kill the ball.”

The Tritons haven’t defeated a conference opponent this season, but freshman outside hitter Dimitar Kalchev knew CSUN would still need to play well to win.

“We knew we couldn’t underestimate them even though they’ve been on a losing streak lately,” he said. “That’s really important in volleyball, never underestimate your opponent or you might regret it in the end.”

Kalchev had four kills for the Matadors (.182), and added two more aces to his team leading total which now stands at 35 for the season.

Junior outside hitter Bradley Sakaida finished second on the team with six kills (.286), and was pleased with the teams effort.

He said he believed the team stuck well to its identity during the game.

“We knew we could have a good chance of beating this team if we just played our game,” Sakaida said. “We did a great job of executing by getting ourselves in and passing well, which led to a good game for us.”

CSUN, as a team, hit .371. The Matadors also displayed a solid defensive performance by finishing with 14.5 blocks compared to the four from the Tritons.

The Matadors have won two of last three games after losing four straight.

The next game is Friday, Feb. 26, when CSUN travels to Utah to face Brigham Young University at 7 p.m.