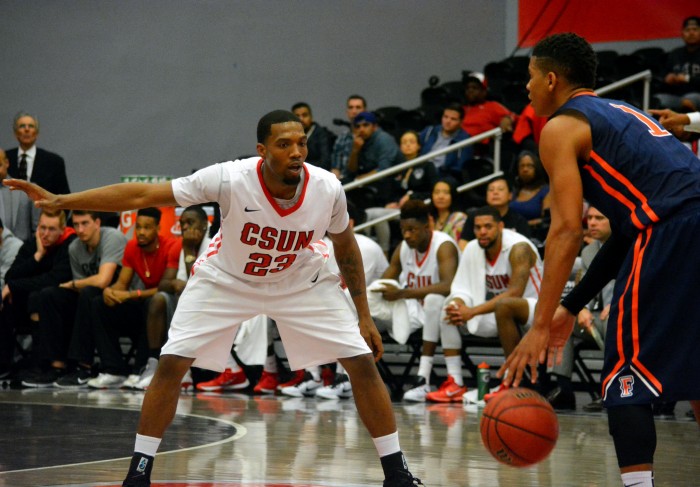 The Matadors were lead by sixth-man and sophomore guard Jerron Wilbut. He scored 18 points on five-of-12 shooting including making four-of-six from the 3-point line.

The Matadors were able to edge out a victory with strong defense by collecting nine steals.

CSUN was also able to outshoot the Mustangs by making six-of-12 from the 3-point line and shoot a 77.8 percent from the free-throw line.

CSUN was able to rebound from the terrible 3-point shooting night they had against Hawaii, where the Matadors made only one-of-14 from three.

To begin the game, the Mustangs jumped out to an early 5-0 lead but the Matadors battled back to get within one, following a 3-pointer by Wilbut, to make the score 14-13 with less than 11 minutes left in the first half.

With more than nine minutes to go in the first half, junior guard Kendall Smith gave the Matadors a 16-15 lead on a drive to the basket.

The Matadors held a 32-31 lead heading into the half following a lay-up by senior forward Tre Hale-Edmerson.

CSUN began the second half on a 5-0 run that gave the Matadors a 37-31 lead following a three-pointer by Hale-Edmerson.

With about 11 minutes left in the second half, the Matadors stretched the lead to 55-41 after a pair of free-throws by junior guard Aaron Parks.

However, over the next 10 minutes, the Mustangs rallied and went on a 20-6 run to tie the game at 61, to force overtime.

In overtime, the Matadors traded baskets with the Mustangs while neither team was able to pull away considerably.

With a minute to go in overtime, the Matadors took a 69-68 lead on a lay-up by sophomore guard Micheal Warren. CSUN was able to keep the lead and win.

Next, the Matadors will play the University of California Santa Barbara Gauchos on Thursday, Feb. 25, at 7:30 p.m. in the Matadome.