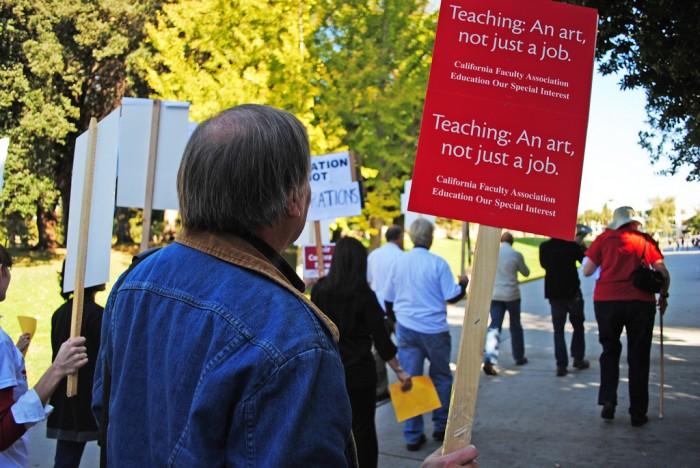 The CFA and CSU are currently in the fact-finding phase of negotiations. A strike cannot take place until 10 days after a report on the dispute is released by fact-finder Bonnie Prouty Castrey. Signs held during the CFA informational picket on campus on Nov. 8, 2011. (Andres Aguila/ The Sundial)

Negotiation remains an option in the dispute between the California Faculty Association and California State University administration, but the CFA continues to prepare to strike, according to CFA President Jennifer Eagan.

“We’re trying to get management to tell us something other than 2 percent so we can talk … the ball is in the court of CSU management,” Eagan said during a press teleconference held on Feb. 12.

The CFA is requesting a 5 percent general salary increase (GSI) and a 2.65 percent service salary increase (SSI). The difference between the CFA’s request and the CSU’s offer of 2 percent amounts to nearly $70 million. That money equals somewhere between 1.4 and 1.7 percent of the CSU’s $4 billion budget.

Eagan said that the CSU can afford the difference because it managed to collect an “extraordinary reserve” of funds by saving money on faculty salaries. The funding on direct instruction declined by 4 percent between 2004 and 2014. The CSU’s reserve began to accumulate in 2010, the same year the CFA voted to accept a 10 percent pay cut in the form of work furloughs.

CFA Communications Director Alice Sunshine, who hosted the teleconference, suggested that the CFA’s proposed salary increase may not even draw from that reserve. State funding for the CSU increased by $97 million this year.

“Funding from the state is being restored … and we think it’s reasonable that some of that restoration go to the faculty,” Eagan said.

If the two sides do not come to an agreement, a system-wide CSU strike will take place between April 13 and April 19. More strike dates are a possibility if the CFA and CSU cannot come to terms.

CFA members are reluctant to interrupt their teaching duties, but they feel that drastic action may be necessary, Eagan said. She added that some faculty wonder how they will afford to send their own children to college.

“We are really hoping we can get this settled,” Sunshine said.

The CFA and CSU are currently in the fact-finding phase of negotiations. A strike cannot take place until 10 days after a report on the dispute is released by fact-finder Bonnie Prouty Castrey.