Tattoo Tuesday: testing limits one small tattoo at a time 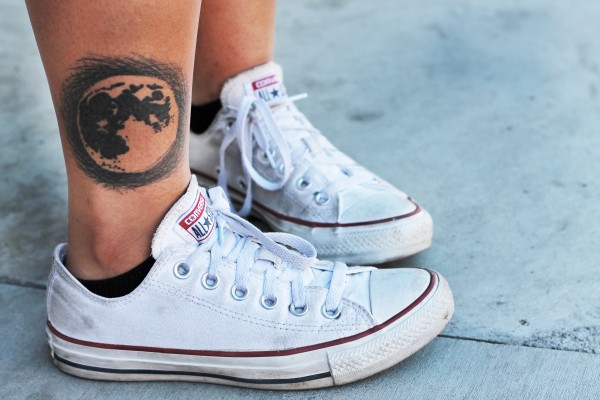 Melanie Moran,19, a Mechanical Engineer major, shows off her moon tattoo located on the bottom of her right calf. (Ashley Grant/ The Sundial)

Melanie Moran, 19, a mechanical engineer major, tests her pain tolerance with a small tattoo in preparation for a large thigh piece in the future.

On the bottom of Moran’s right calf sits a medium size moon in black and grey ink.

“It was just telling myself to get something and so that’s what I got,” Moran said. “But I didn’t want just the moon so I also got the shading around it.”

Before she went through with the ink session, Moran had originally planned for a much bigger tattoo piece, but was hesitant into committing in fear of pain.

“I wanted to do something first to see if I could even handle the pain,” she said. “I got it done by my sister’s friend. He works out of a tattoo place, but I just got it done because it was super cheap.”

The moon tattoo, shading and all, only took one hour to complete and with her tight budget as a full-time college student, 45 dollars was all Moran could afford.

“I wanted the moon smaller originally, but when he drew it out it was bigger and he said he couldn’t make it any smaller so I was like, ‘OK, it’s fine’,” Moran said.

Along with the calf tattoo, Moran also has a black-and-grey flower design located on her sternum, which she still remembers vividly.

“The flower one hurt really bad, like really bad,” she said. “It only was 200 dollars I think, so I didn’t want to go back to that guy.”

Moran plans to continue to add to her tattoo collection, but is always tentative in where she puts them and how they could be hidden from view.

“I do want more and I still want my original idea, but I’m a little iffy about it just because I want it on my thigh,” said Moran looking down at her leg. “I’m still a little hesitant on if I want it so visible.”

The two tattoos she currently wears on her skin can be easily covered with a shirt or a pair of long socks, but wearing dresses would come as an issue if Moran went through with her original tattoo.

“These two are a little easier to hide just in jobs and stuff,” she said. “But I do want more, I just have to think about it longer.”