The Matadors finish the series 1-2 against CSU Bakersfield 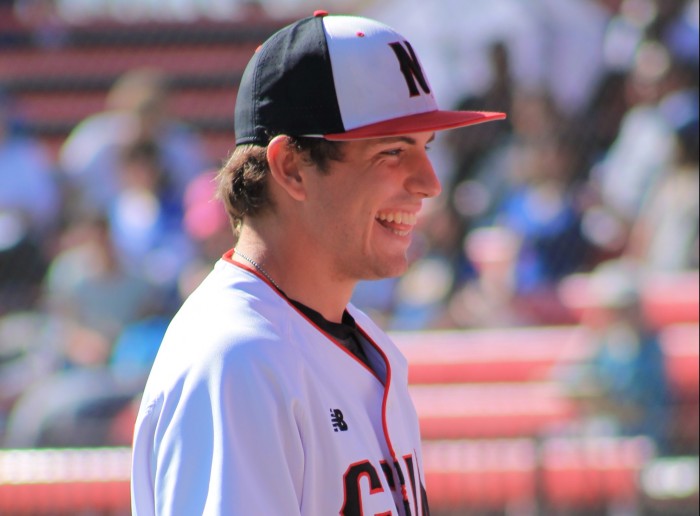 Justin Toerner and the CSUN baseball team finished the weekend with a record of 1-2 after dropping two games against Cal State Bakersfield. (File Photo / Ashley Grant / The Sundial)

After losing the first game of the three-day series to Cal State Bakersfield Roadrunners 5-8, CSUN came back in the second game on Saturday with a win.

The game started out close as both teams remained scoreless until the fourth and fifth innings. CSUN scored first in the fourth inning with a run from Branden Berry. With a 1-0 lead, Justin Toerner scored on a ground ball hit by Dylan Alexander to extend the Matadors’ lead to two runs.

Bakersfield scored twice in the fifth inning, tying the game up. The Matadors came back in the sixth inning when Toerner scored.

In the seventh inning, CSUN’s Alexander and Toerner scored to bring the lead to 5-2. The Roadrunners answered with two runs to cut the lead, 5-4.

In the top of the eighth, the Matadors brought in two more runs to lead 7-5.

Sophomore Kenny Rosenburg started the game and pitched four innings. He hasn’t played since 2014 and was out last season due to an injury.

Conner O’Neil closed the game out for the Matadors.

CSUN went on to play The Roadrunners for the third time on Sunday at Matador Field.

Sophomore Joe Ryan started the game and the Roadrunners quickly marked the board with one run in the first.

The Matadors did not come back with a scoring run until the fourth inning. There were two outs in the inning as Branden Berry and Yusuke Akitoshi were both on base. Toerner and Nolan Bumstead brought in the runners, the Matadors led 3-2.

Bakersfield tacked on three more runs to take the lead for good. The Roadrunners won the rubber match, 5-3, and won the three game series 2-1.

The Matadors will travel down Pacific Coast Highway to Pepperdine University on today at 2 p.m.