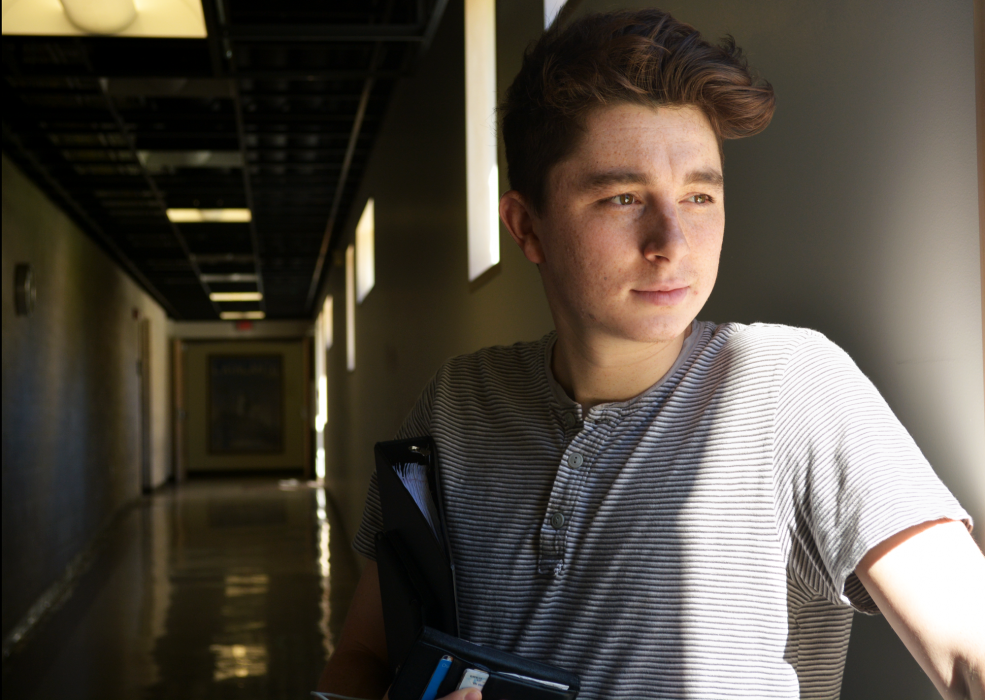 For a Halloween film contest, a CSUN student teamed up with American filmmaker Eli Roth and Jack Davis,* for his 15-second horror thriller “Who Wants to Play With the Rabbit?”

The video has more than 140,000* views on CryptTV, an online site that pushes the boundaries of short-form, horror-based content on social media.

“Working with CryptTV is fun as hell. When they hired me, they were just starting out and let me experiment a ton. I brought on my usual crew and we just played around,” the CSUN student said. “It was the first time I had ever done horror. I decided to jump into it in a fun, punchy way. ”

Roth, who created CryptTV, had also hired Yonathan to direct his web series, “Follower,” which will come out sometime in Spring.*

Yonathan will work with a $20,000 budget* to direct an undergraduate senior thesis film at CSUN and was granted a Hollywood Foreign Press Association fellowship.

The 22-year-old began a love affair with film directing at a young age. It all started when he was 10 years old and was playing with his friend’s JVC video camcorder.

The Van Nuys native had the idea to record his friend pretending to punch the camera, so the viewer would get the visual of a quick punch to the face. Then Yonathan gave his friend the camera back to shoot him falling over from getting hit.

“Everyone thought I was the greatest thing to ever happen,” Yonathan said.

From this point on, Yonathan was hooked and his love for film slowly reeled him in. He said all he ever wanted to do as a kid was make movies. As a child, play dates turned into filming sessions and friends turned to actors.

“[Yonathan] has a great attitude toward the work,” Screenwriting Professor Jared Rappaport said. “He is passionate and invested while still open to suggestion and criticism. He has the intelligence to discern which suggestions to incorporate into his work.”

Yonathan said he has had support from his friends and family since he was young. He credits his mother for putting belief in him to be a filmmaker.

The want to be a filmmaker isn’t attributed to one event in his life. It was a gradual interest, according to Yonathan.

One of the events that made him want to be a filmmaker was when a film was shot at his house. The movie was “Palo Alto,” and it was directed by Gia Coppola.

“When Gia Coppola came to shoot her independent feature at my house, it was the first time I got up close and personal with a with a real film set. It was electric,” Yonathan said.

Yonathan said the film crew was looking for a location to shoot and one of his neighbors suggested they use Yonathan’s house as it was known he had a love for movies.

“The best part of that experience was sitting down and talking with Gia,” Yonathan said. “She gave me some top secret directing advice that her grandpa [Francis Coppol] gave her — that I’d probably be killed by the Italian mob if I share. But it helped me become a better director, and now I know why he is a genius.” ‘

Ian Nelson, a senior majoring in cinema and TV arts, is one of Yonathan’s best friend and co-filmmaker.

They met while working at a movie theater while they were both in high school.

“[He is] eccentric, hilarious, unfiltered and at times just purely obnoxious,” Nelson said. “He can come up with some pretty creative ideas.”

The friends began their filmmaking career together when Yonathan asked Nelson to be his head writer for the Los Angeles 48 Hour Film Project. The project is a contest where film crews are assigned a genre and have 48 hours to make an appropriate film.

In high school, Yonathan also won a top award. He was awarded for best drama for his film “Collateral Damage,” as well as best comedy for “Ball” at the Los Angeles Student Media Festival. The festival showcases L.A.’s most talented high school student filmmakers.

“My greatest accomplishment to date is probably the fact that, during a screening of my short film ‘Beyond Walls,’ a girl had a panic attack and began to cry,” Yonathan said.

“I just came off my short film, ‘Beyond Walls.’ That is a contained thriller and makes people anxious,” Yonathan said. “I wasn’t interested in making people scared, just entertaining them.”

He was also the lead editor for an international theatrical trailer in 2014.

The senior, majoring in CTVA with an emphasis in editing, is one of the four students selected to direct an undergraduate senior thesis film at CSUN.

Yonathan will direct a film based on the Israeli-Palestinian conflict. The setting is planned to be in the Middle East and the storyline will be told through the eyes of an American in a hostile territory.

The running title of the senior thesis film is “The Eyes of Men,” according to Yonathan. Without giving too much away, Yonathan said he wanted to present humans in their normal element. He said he wants to make a movie that taps into people’s primal need for fight or flight.

The movie completion date will be around December 2016, according to Yonathan, with shooting to occur in late May or early June*. Yonathan said he would love people to see his movie. He hopes it will be showcased at the Senior Showcase in May of 2017.

Yonathan said for his CSUN senior thesis the majority of funds come from the students. The students work as crew members and are required to give $1,500. That money covers the costs of the film. The rest of the budget is crowdfunded by student filmmakers.*

Nate Thomas, CSUN professor and film production option head, said CSUN gives $5,000 to the film crew. Students can raise additional funds, but it is not required, according to Thomas.

Yonathan said it would be a great honor to win a student Oscar, but that’s not why he did it.

“[I’m] making it for the pure enjoyment of making a movie,” Yonathan said.

Yonathan recommends five movies everyone should see before they die. He picked the films as if it was needed for “the importance it is for the human race.”

*This article was changed on March 2 and March 3 because of innacurate information and edits.