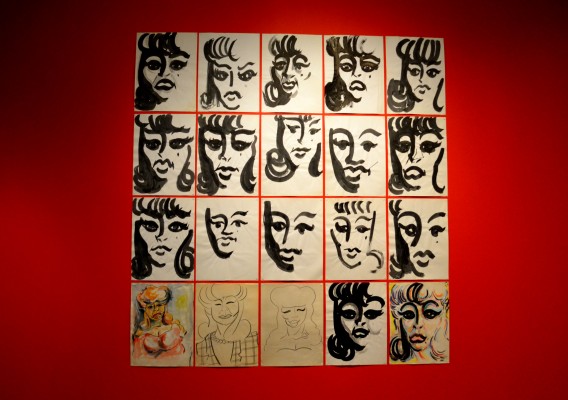 Rows of Montoya's studies of women's faces covers the back wall of the exhibition at the Fowler Museum. (Natalie Jimenez /The Sundial)

The opening night of Jose Montoya’s Abundant Harvest: Works on Paper/Works on Life at UCLA’s Fowler Museum proved to be successful as hundreds of people attended to commemorate the lifetime work of Montoya through nearly 2,000 of his art pieces.

Montoya’s personal experience of working in the fields from a young age and his understanding of harsh living conditions faced by migrant workers was reflected in both his activism and his art. He was a fundamental figure during the Chicano Movement – especially when it came to civil rights and the rights of farmworkers – by capturing its struggles and victories through his drawings, paintings and poems.

With more than 4,000 drawings to choose from, the co-curators Selene Preciado and Montoya’s son Richard chose to focus on the artist’s works on paper – which were displayed in rows of cardboard fruit boxes to further honor the artist’s roots.

Montoya was known to be constantly drawing and used anything in his reach to produce his art, whether that meant drawing in a sketchbook, on a napkin, or on scraps of paper. Despite the origin of the paper, the artist was able to create complete and complex scenes and portraits of his reality.

“[He] was committed to the cause and you can see it in his poems and his artwork,” said Preciado. “Characters from his community [were] always the subject matter of his works.”

The artist used pachucos and pachucas to represent the first “freedom-fighters” of the Chicano Movement, while still including other subjects such as cholas, abuelitas, soldiers and sailors, campesinos, revolutionaries, and los de abajo – those at the bottom.

“This exhibit can be a way to remind people who [Chicanos and Chicanas] are,” said Sammie Martinez, a member of the Brown Berets. “Seeing this is like holding on to our identity as we are trying to be washed away.”

CSUN professor of Chicano/a Studies Yreina Cervantez emphasized on the importance of art during the Chicano Movement and in current times by saying art is timeless when it has to do with the relevancy of people’s lives.

“[Students] will be able to see his work and see how it resonates with their own experience,” said Cervantez. “His work is universal. Anybody who has an interest in human rights and the dignity of people can relate to his work.”

“Even though I’m not Chicana I still found I could relate to some of the pieces,” said Guardado. “It was a great way to artistically see Chicano culture.”

Montoya was able to capture the daily life of Chicanos during troubled times, capturing the ordinary and the extraordinary moments of a community that is often cast aside in society and media platforms.

“He was very much an advocate for people who didn’t have a voice and his artwork often shows that side of him,” said Montoya’s granddaughter Siboney. “I hope that people who see his art can take away the empowerment of the Chicano movement he was so a part of.”

This exhibition is the first solo museum display of the Chicano artist’s work and will run through July 17 at UCLA, 308 Charles E. Young Dr. North, Westwood, Los Angeles.