CSUN blanks Pepperdine on the road 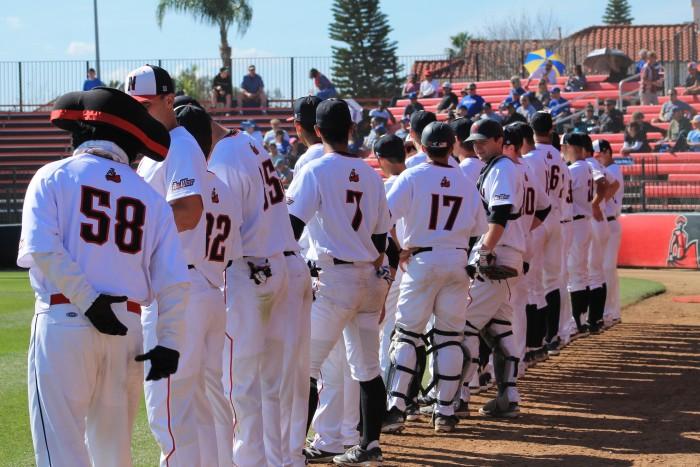 CSUN standing together while the national anthem is played at the beginning of the game. File Photo / Ashley Grant Photo credit: Ashley Grant

Along with two homers and an RBI single, CSUN’s baseball team shut out the Pepperdine University Waves to secure a 3-0 road win Tuesday.

After losing a three-game series against CSU Bakersfield to start the season, the Matadors were able to put runs on the board for the starting pitcher, sophomore Andrew Weston, who earned his first win of the season.

The game was scoreless until sophomore third baseman, Nolan Bumstead, came in to pinch hit and singled through the right side to bring home senior first baseman, Branden Berry in the fifth inning.

That marked Bumstead’s second RBI of the season.

In the sixth inning, Berry homered to left field to bring in the Matadors’second run. Berry went two-of-three at the plate.

In the top of the ninth inning, sophomore designated hitter Albee Weiss, homered to add an insurance run.

The Matadors brought in three runs on six hits and one error.

Closing the game was junior Conner O’Neil who earned his first save of the season. In 2015, O’Neil set the CSUN all-time single season save record with 12.

Despite coming close to scoring in the first and second inning, the Waves were kept quiet throughout the game and were limited to six hits, while leaving six men on base.

The Matadors return home Friday at 2 p.m. to start a four-game series against the University of Northern Colorado.