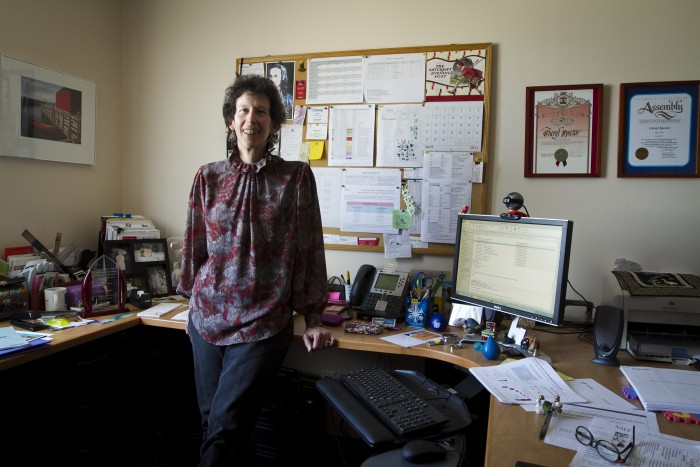 Cheryl Spector, Director of First Year Experience, at her office in the Cielo Suit in Sierra Hall on July 27, 2013. (File photo/ The Sundial)

Reports by the Educational Policies Committee were presented as well as provost and CFA reports.

The meeting was mediated by faculty president, Adam Swenson. In attendance were professors from various departments at CSUN and executive members.

Laurie Borchard, coordinator of Affordable Learning Solutions, introduced a resolution from the chancellor’s office to improve the students’ quality of education and access to textbooks.

The initiative, called the “Resolution of the Academic Technology Committee,” aims to make textbooks more affordable and assist students in accessing available resources on campus.

The California College Textbook Affordability Act was passed in 2015. In order to request funding through this act, the state senate had to adopt the resolution, and it passed by a unanimous vote.

“I’m unable to think of any drawbacks … there is no reason to oppose this,” Spector said. “I found it to be well written, carefully worded, and provided sufficient degrees of freedom for the faculty to do what is right and what is best for the students.”

Bruce E. Shapiro, director of math, was concerned with the section stating that quality, peer-reviewed materials would be in stock.

“There are still not sufficient peer-reviewed materials, and I don’t think there is anything to give faculty incentive,” Shapiro said. “If they can’t find easily a good quality material, they will just order a $300 textbook online.”

Although the resolution is new and has not yet been proven effective, some believe it will be a positive change in education, making it easier for students to access course materials

Faculty members also made announcements about future endeavors on campus.

Veda Ward, faculty representative for Associated Students, promoted the student government and suggested that faculty be involved and attend at least one meeting.

The faculty athletic representative, Dr. Ed Jackiewicz, spoke on behalf of the athletic department in regard to student athletes on campus.

“My primary objective is to make sure they succeed academically,” Jackiewicz said.

Athletes with a grade point average of 3.5 and higher were awarded a free breakfast. Eighty four of the 350 athletes were able to meet that goal.

Jackiewicz also spoke about getting athletes more involved in campus life and creating opportunities for faculty to get involved with student athletics.

In response to the progress of the Intercollegiate Athletics Advisory Council, student athletes are now only allowed one online class per semester.

The Educational Policies discussion was led by Larry Becker, chair of the EPC, and Liz Adams, associate vice president of Undergraduate Studies. A small change was made in response to the executive order by the chancellor’s office. In order for students to receive credit for general education basic skills courses, they must get a C or better in the course. The writing counsel has recommended that students who test into college-level writing should be allowed two semesters to complete the requirement. This would allow the department to spread out the enrollment and allows advisors flexibility.

In the provost report, Yi Li promoted creating more office spaces for faculty so each professor has their own office space. This was a priority regarding space management from the cabinet meeting mandate.

Funding to the school by the department of finance is tying the money to four-year success rates now instead of six-year success rates. The academic planning subcommittee resolution is to have students complete school within four years and increase the success rates of students of full-time equivalent status, meaning that the student is enrolled in 15 units per semester.

“Whether it happens or not depends on whether the people of the chancellor’s committee and on the negotiating committee come to the table or not,” Schutte said, “but we are watching with great intention.”

CFA President Nate Thomas was not in attendance but was scheduled to respond to questions on the latest CFA report and on the potential strike.

The rest of the meeting was composed of several senate elections, including faculty officers, statewide academic senator and executive committee member.