Mysterious piles have been discovered, staircase mistaken as toilet 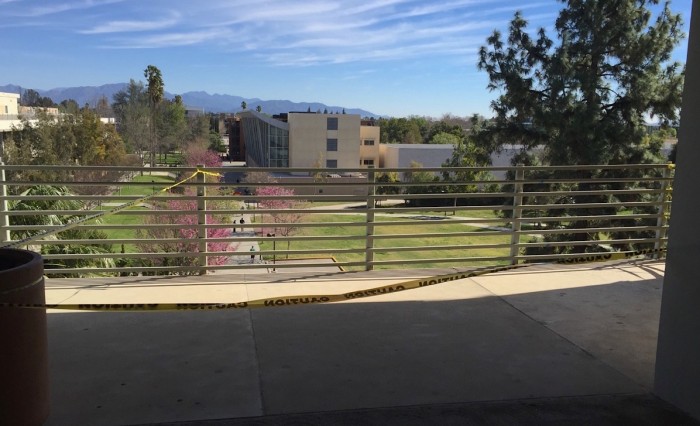 Caution tape blocks off the third floor staircase in the B3 parking structure on Monday.

Traffic jams aren’t the only pile up in the CSUN B3 parking structure anymore. If you take the staircase — watch your step.

An unpleasant smell and yellow caution tape have recently blocked the third-floor stairs because a mystery suspect has unloaded human feces.

You read correct — this semester it has been reported six times someone has used locations on campus as a public outhouse.

Students were shocked when they had to navigate around the dump.

Answer: I’ve seen the pile and it smelt like human feces.

Q: Was it human or animal crap?

A: The first time I saw it I thought, ‘there’s no way it is human.’ The most recent time I totally gagged — it seemed fresh. It was still lying there and I’ve never see them cleaning it up. The Monday before … is also when I saw it and I wanted to throw up.

Q: What was your first reaction? Did anyone around you notice?

A: I’ve always been alone and I just walk around it. One time there was a footprint step in it, which is terrible. It’s pretty gross and they blocked off the staircase. I had to use the elevator, which I don’t like doing.

Upon investigation, CSUN PD has discovered the mystery piles in the B5 parking structure and the Transit Center as well.

The most recent doo-doo was reported on Feb. 21 at 8 a.m., according to the CSUN crime log.

The log reports accounts of the phantom dumper unloading their business on:

The suspect had left the location prior to officers’ arrival and all reports are under investigation.