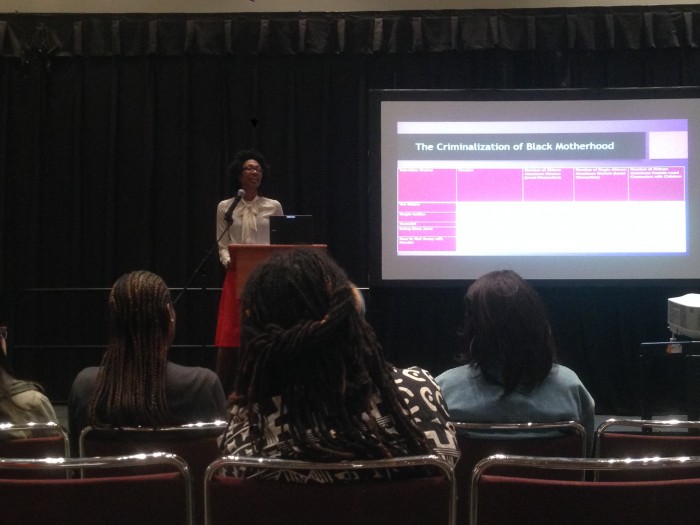 Gammage explored the roles that racism, misogyny and media play in the representation of African American women. She went in depth discussing television dramas, reality television shows and news coverage on the reinforced stereotypes of Black womanhood.

Gammage expressed her thoughts and feelings on the recent scrutiny Beyoncé received in the media for embracing her blackness.

Despite being a performer known to sell out arenas all over the world and securing $50 million endorsement deals, the moment she brings culture into “pop” music she becomes unworthy of her crown, Gammage explained.

“The simple tribute to the Black Panther Party and Malcolm X placed in the American homes are a very uncomfortable conversation that has been written out in America History,” Gammage said.

With a Ph.D. in African American studies, Gammage’s focus was to research and find the facts on how racism and sexism portray Black women in media. Due to her own experience growing up in New Orleans, Gammage grew interest on issues surrounding the black community.

“We consistently see not just in television drama, but these unsupportive black women who engage in physical confrontation but also verbal confrontation,” Gammage said.

She gives an example of the popular show, Being Mary Jane. In one episode, there is a scene where two women argue about an incident where someone told on Jane and she confronted her friend about it. They began to insult each other’s womanhood, desire and inspiration for their future. In this, a hypercritical relationship has developed where African American women are seen as violent, aggressive and unfriendly.

In addition to black women being labeled as careless mothers by the media, even anti-abortion campaigns made false claims such as, “The most dangerous place for an African American is in the womb,” Gammage explained.

“It is essentially saying that black women are unfit even to carry black children,” Gammage said. “So then I ask you, ‘who is?’”

According to Gammage, First Lady Michelle Obama has proclaimed her woman and motherhood as a result of the misrepresentation of black women in the media. Her priority is to raise her daughters to be productive citizens and to be strong African American women. Michelle Obama’s understands and Identifies with African American values and history and embodies love, nurture and wisdom, Gammage explained.

In the last chapter in her book, Gammage explains how it is important to challenge images, to be able to self-identify and to express their own understanding of womanhood.

“She made me think about community; it takes a village to raise a child so when she told me that I have my family to help discipline my son and to nurture him I don’t feel alone in parenting,” 23-year-old sociology major Yahana Thomas said.

Keary Johns, 20, major in Psychology expressed his feelings regarding social media and how could he contribute to the future of the portrayal of black women.

“I will do my best on social media to let the world know that there is actually an assault on the black women,” Johns said.